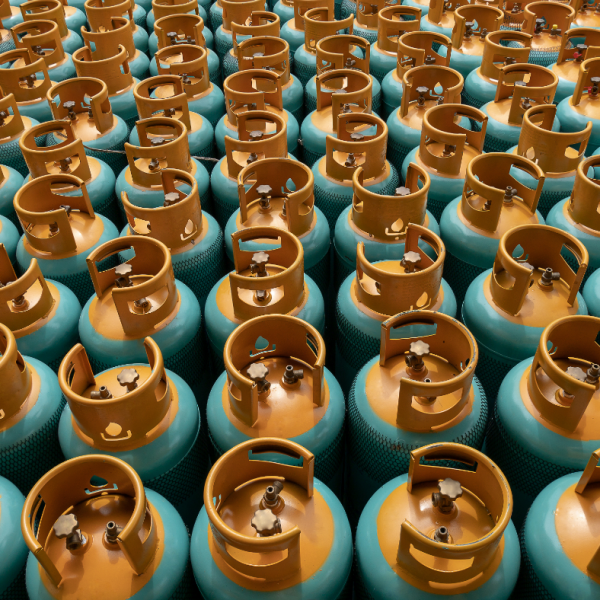 Natural gas analysis commonly involves the quantification of nitrogen, carbon dioxide and C1 through C5 hydrocarbons as individual components, while C6 and heavier hydrocarbons are combined and measured as a single peak (C6+). Extending the analysis to obtain the compositional breakdown of the C6+ group can provide valuable information, particularly for rich gas samples (those higher in heavier end components).

The system described here is designed for the extended analysis of natural gas and natural gas liquids (gases liquefied under pressure) up to C16 or higher. It provides the requirements of GPA methods 2286 (gas) and 2186 (liquids).

It also includes the determination of oxygen and hydrogen sulfide in addition to the above mentioned components. The light gases including hydrogen sulfide are separated isothermally using packed columns and measured with the thermal conductivity detector (TCD). Hydrocarbons, methane through heavy end components, are separated with a capillary column using temperature programming and are measured using a flame ionization detector (FID). 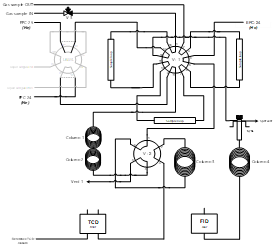 As illustrated in Figure 1, for the analysis of natural gas (GPA method 2286), the 14-port valve (V1) provides simultaneous sample injection into each of the three columns. Two of these flow directly into molecular sieve and porous polymer columns, the other via a splitter injector into a capillary column.

The packed column separations are completed in about 7 min. Temperature programming is started at 6 min. to elute the heavier hydrocarbons from the capillary column. The heavier hydrocarbons in the porous polymer are also eluted during the temperature programming, without measurement, so this column is ready for the next analysis as soon as the current analysis is completed.

The Natural Gas system C hardware can be upgraded with a number of options:

For natural gas liquids (GPA Method 2186), an optional 8-port dual liquid sampling valve can be installed. This injects simultaneously two samples, one into the porous polymer, the other into the capillary column. The molecular sieve column is not used since oxygen/nitrogen separation is not needed on liquefied samples.

In those cases where the Helium and-/or Hydrogen content needs to be quantified too, an additional packed column channel can be added. This consists of another Injection+Backflush valve, packed columns and TCD operated with nitrogen carriergas. See figure 4 below. 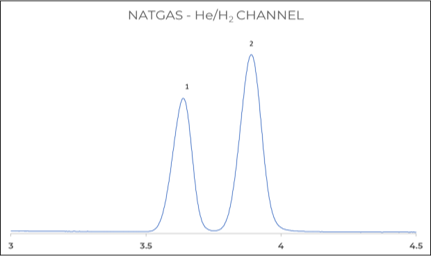 Instead of adding a He/H2 channel *) a dedicated low sulfur channel can be added too.

This channel consists of a GSV, S/SL or mini gassplitter, capillary column and PFPD or SCD detector.

This channel can provide detailed information about the content of hydrogen sulphide, carbonyl sulphide and mercaptans. See figure 5 below.

*) NOTE: A SCION Gaschromatograph can accommodate maximum 3 detectors. So, only one additional channel can be added. 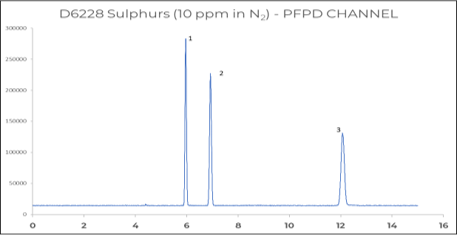 Figure 5: Sulfur components in Natural gas by means of PFPD

Also, the chromatogram clearly indicates that hydrogen sulfide is detectable down to well below 100 ppm on the TCD and below 1 ppm on the extra channel with PFPD.

The dedicated Natural Gas Reporting Tool is a powerful plug-in software package in the SCION CompassCDS which allow calculations according all common standards. The report can be customized according the users’ wishes.

The obtained results demonstrate that this Scion Instruments Natural Gas C analyser passes the criteria set forth in the relevant methods. The analyser is not only robust, but also flexible. Additional channels, like for instance a sulfur channel, are available to meet your requirements.