The health benefits of consumption of olive oils as part of a healthy diet reaches back to the mid 1950’s. In the late 1990’s, interest in characterizing other components of olive oils included determining the concentration of benzene, toluene, ethylbenzene, xylenes and styrene (BTEXS).  Some of these compounds are naturally occurring, while others may be introduced through the processing of olive oil.

The method suggested for the determination of BTEXS in olive oil is static headspace.  This application note will reproduce some of the static parameters found in this suggested method with the static features of the SCION Instruments HT3.

This application note will also demonstrate the versatility of the static and the dynamic capabilities of the HT3.  These features allow laboratories the capability to use both static and dynamic headspace methods to characterize the volatile flavour components of olive oils and accurately quantify low level compounds like BTEXS. 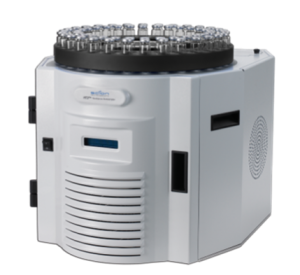 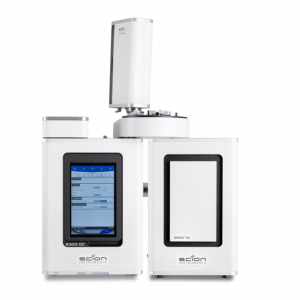 Figure 1. SCION HT3 Headspace Sampler together with the SCION Instruments 8300 GC platform in combination with to 8700 SQ-MS equipped with 8400PRO autosampler .

Olive oil has been part of the Mediterranean culture for thousands of years.  Ancel Keys of the University of Minnesota was intrigued by the low incidence of coronary heart disease in the adult population of Naples Italy in 1952.  His research has led in part to the current interest in the Mediterranean diet.  This diet includes using olive oil, an oil low in saturated fats typically found in animal fats, palm, and coconut oil, and also a rich source of monounsaturated fats. Since then, other healthy uses for olive oil, such as salad dressing, have been discovered.

Because of the natural origin of olive oil, recent methods have been used to determine the amounts of benzene, toluene, ethylbenzene, xylenes and styrene (BTEXS) present. These methods recommend static headspace techniques to extract the BTEXS from various olive oils.  These methods use a variety of techniques including differing sample sizes, GC/MS with selected ion monitoring (SIM), and stirring the sealed sample with Teflon coated stir bars to achieve the lowest detectable levels of these compounds.

This application note will explore the ability of the static and dynamic methods of the Teledyne Tekmar HT3 to detect BTEXS in various olive oils. The static method is utilized to characterize volatile flavor compounds responsible for the flavor and aroma of olive oils.  The dynamic method is utilized for the concentration of low concentration of volatile organic compounds, like BTEXS, and to enhance the signal to noise (s/n) ratio for lower detection levels.  The HT3 allows both methods to be performed in the same sequence. 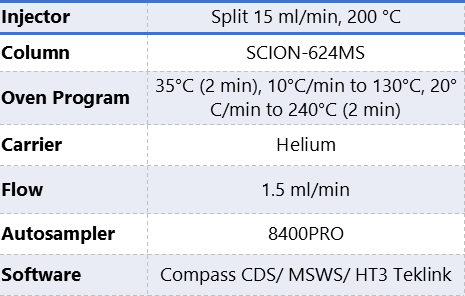 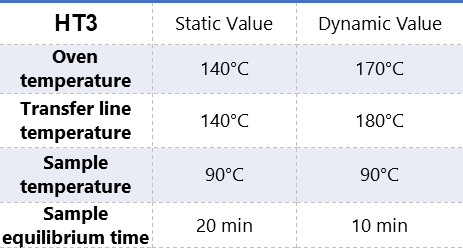 Seven different olive oil samples were obtained from a local market.  Three of these, identified as S1, were from the same manufacturer and consisted of a light flavour, pure, and extra virgin olive oil.

An environmental standard containing benzene, toluene, ethylbenzene, o-, m-, and p-xylene and styrene was spiked into one of the olive oil samples to determine the retention times of these compounds.  1µL of a 2,000µg/mL solution was added to 10g of olive oil in a 22mL headspace vial.

All of the static and dynamic olive oil headspace vials were analyzed in a single sequence on the HT3 and the SCION Instruments GC/MS system with the parameters listed in Table 1. 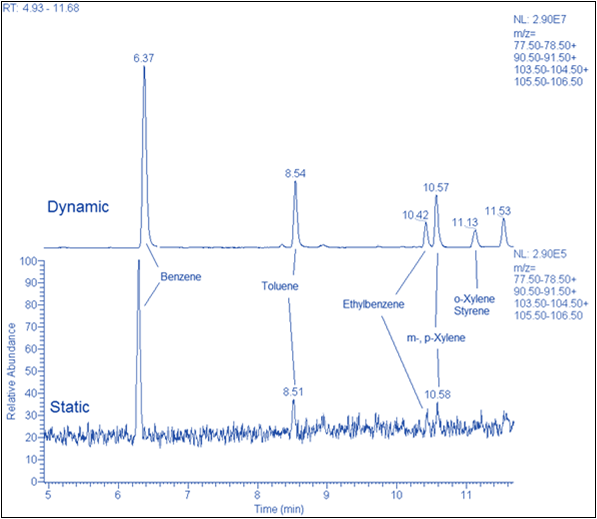 Figure 3.  Comparison of the Static and Dynamic Summed Ion Chromatograms of the BTEXS Ions for Olive Oil Sample S1 Pure. 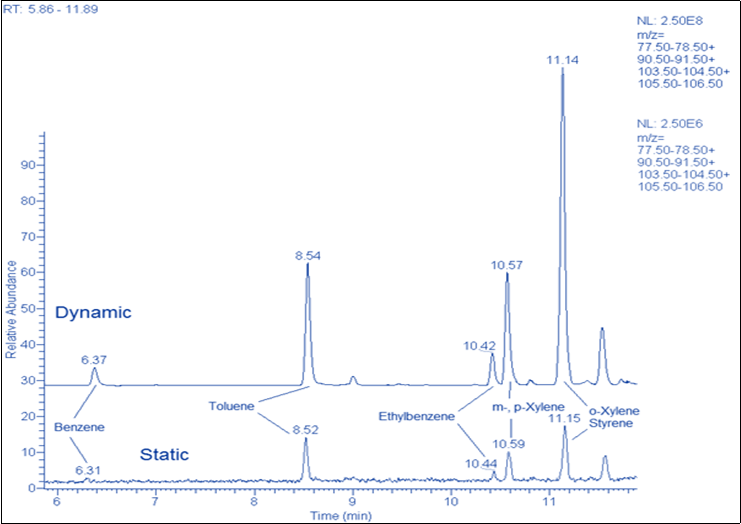 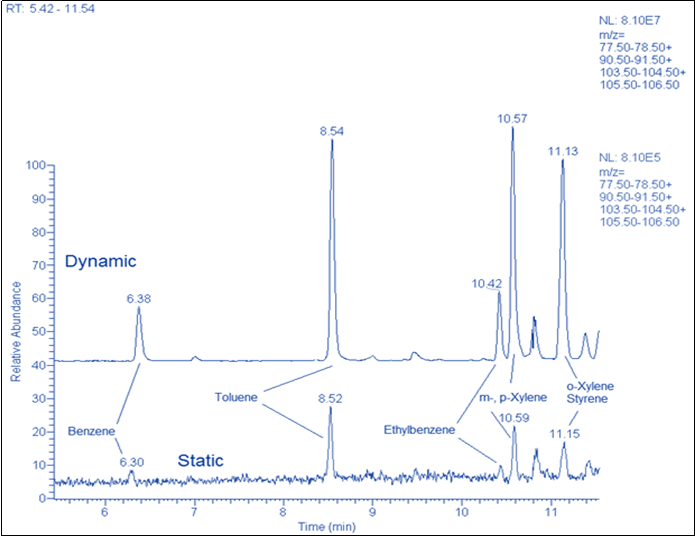 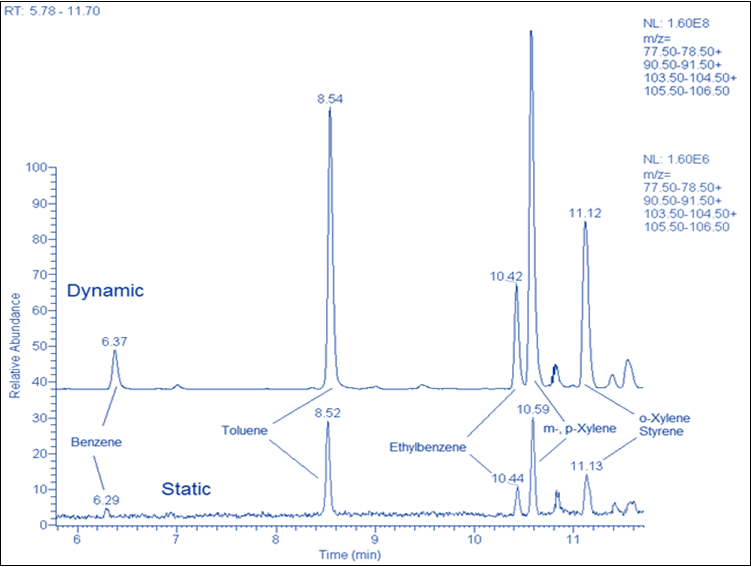 Recent advances in characterization and enhanced detection limits have found trace amounts of BTEXS in samples of olive oils.   One of the suggested methods for the determination of BTEXS in olive oils has been static headspace with GC/MS selection ion monitoring.  The SCION Instruments HT3 is a flexible instrument that performs both static and dynamic headspace analysis for a wide variety of sample matrices including olive oils.

Seven olive oil samples were concurrently tested with both the static and the dynamic modes of the HT3 for benzene, toluene, ethylbenzene, xylenes and styrene.  The static method requires 10g of olive oil compared to 2g for the dynamic mode.

The data indicated similar results for all of these compounds, except benzene. The dynamic mode detected higher concentrations of benzene in six of the seven olive oil sample. The seventh olive oil sample was used to normalize the peak area data.

The dynamic method also demonstrated increased single to noise ratio for all of the compounds with 5 times less sample than the static method.  The trap also allowed for the preliminary separation of the BTEXS compounds from other matrix effects from the olive oil.

The HT3 provides the olive oil industry the capability to perform both static and dynamic sampling of their products.  This allows them to characterize olive oils for volatile flavour compounds in the static mode and then detect low levels of BTEXS in the dynamic mode.