Fungicides are chemical compounds commonly used to kill parasitic fungi and their spores. Fungi can have devastating impacts in agriculture resulting in critical losses of yield, quality and profit. Fungicides are common upon crop growers due to the longevity that the fungicides work for in the environment. Specifically, Paclobutrazol and Uniconazole are triazole fungicides which act as a plant growth regulators. Plant growth regulators are commonly used to prevent the growth of weeds in households but to also enhance crop yield in plants such as tomatoes and peppers. When used on food crops, Paclobutrazol results in products with a higher resistance to drought and fungi, enabling a higher profit for the producer. Uniconazole is traditionally used to restrain plant grown and delay flowering, enabling the plant to be more manageable.

Although both Paclobutrazol and Uniconazole are traditional triazole chemicals, care must be taken when using on crops as over application can be devastating to the harvesting of the crop. Additionally, the overuse of Paclobutrazol and Uniconazole can result in elevated levels of residues in the harvested fruit and vegetables, which are a threat to consumers. There are numerous regulations worldwide regarding the maximum allowable residue levels in various fruits so the monitoring of these chemicals is critical during crop harvesting. SCION Instruments developed a method for the simultaneous determination of Paclobutrazol and Uniconazole by High Performance Liquid Chromatography (HPLC) with Diode Array Detection (DAD), as shown in Figure 1. 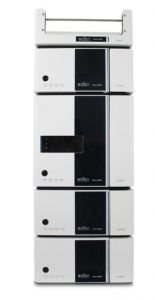 A SCION Instruments LC6000 equipped with autosampler, column oven and DAD was used for the simultaneous analysis of Triazole Fungicides. Paclobutrazol and Uniconazole calibration standards were prepared over a concentration range of 0.20mg/L to 1mg/L. Five different samples, each containing the target compounds were quantified using the calibration curves from the calibration standards. The DAD was operated at a range of 220-400nm with the target absorbance wavelengths at 230nm for both compounds. Table 1 details the analytical conditions of the LC6000.

Calibration standards were analysed at concentrations of 0.1, 0.2, 0.5, 0.8 and 1mg/L for each triazole fungicide. The calibration curves can be found in Figures 2a and 2b. 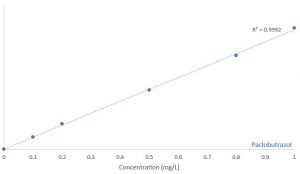 Figure 2a. Calibration Curve of Paclobutrazol 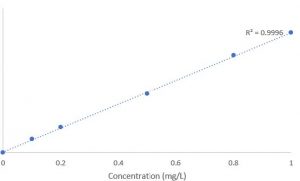 Figure 2b. Calibration Curve of Uniconazole

Both Paclobutrazol and Uniconazole exhibited excellent linearity over a concentration range of 0.1-1mg/L. Five samples containing both target compounds were diluted in methanol and analysed under the same conditions as shown in Table 1. The repeatability of the method was determined using 13 simultaneous injections of the 0.5mg/L standard, for each target compound. Figure 3a shows the overlay chromatogram for Paclobutrazol whilst 3b shows the overlay chromatogram for Uniconazole. 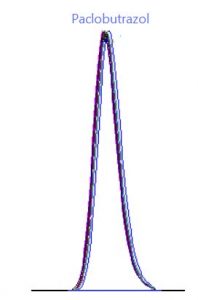 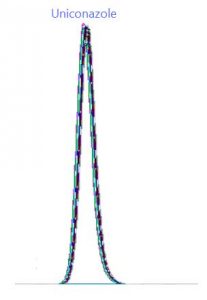 As shown in Figures 3a and 3b, the repeatability of 13 consecutive injections of both 0.5mg/L calibration standards was excellent. The RSD% values for both target compounds, for retention time and peak area can be found in Table 2.

The excellent repeatability values highlights the robustness of the method. With minimum variability between both peak area and retention time, the five samples containing Paclobutrazol and Uniconazole were analysed. Quantitation of all samples was performed using the calibration curves (Figures 2a and 2b). Figure 4 shows an example chromatogram of sample 1. 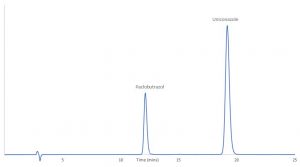 Figure 4 is an example chromatogram from one of the analysed samples; and is representative of all samples. Retention time and quantification of each triazole fungicide was based off the calibration standards. Table 3 details the results from the analysis of all five samples.

Each sample contained varying amounts of Paclobutrazol and Uniconazole. To further confirm peak identification, the three dimensional data from the diode array detector was used; in the form of spectral comparisons. The spectra from both Paclobutrazol and Uniconazole identified in all samples were compared with a spectral reference library. An example of this comparison can be found in Figure 5.

Figure 5 shows the spectral comparison of the identified Uniconazole in sample one with a stored reference standard. The blue window shows the spectra of the reference standard whilst the red window shows the spectra obtained when the sample was analysed. The match between the two spectras was 1000; confirming with 100% that the two compounds are the same. Each sample was compared to the known references for both compounds; each giving a 100% spectral match. This further confirms the presence of both compounds in all samples. Using the diode array detector 3D spectra gives additional certainty and confidence in peak identification.

SCION Instruments developed a method for the simultaneous analysis of two triazole fungicides. Triazole fungicides are highly regulated compounds which can be damaging to not only human health but also crop harvesting if they are used in vast amounts. Using the three dimensional data modelling of the diode array detector provided additional confirmation of peak identification of both Paclobutrazol and Uniconazole. With excellent linearity and repeatability, the SCION Instruments method and LC6000 is perfect for any environmental laboratory.