As plant protection products, pesticides may be used in food production (growth), storage, and transport. The potential physico-chemical transfer of regulated pesticides  varies with the type of pesticide used and the type of food being produced.  The maximum residue levels (MRLs) of pesticides established by the European Commission in effort to protect consumer safety differ according to their risk with the majority of MRLs falling between 10-500 μg/kg (ppb). For pesticides without an established MRL, the minimum value of 10 ppb is taken. 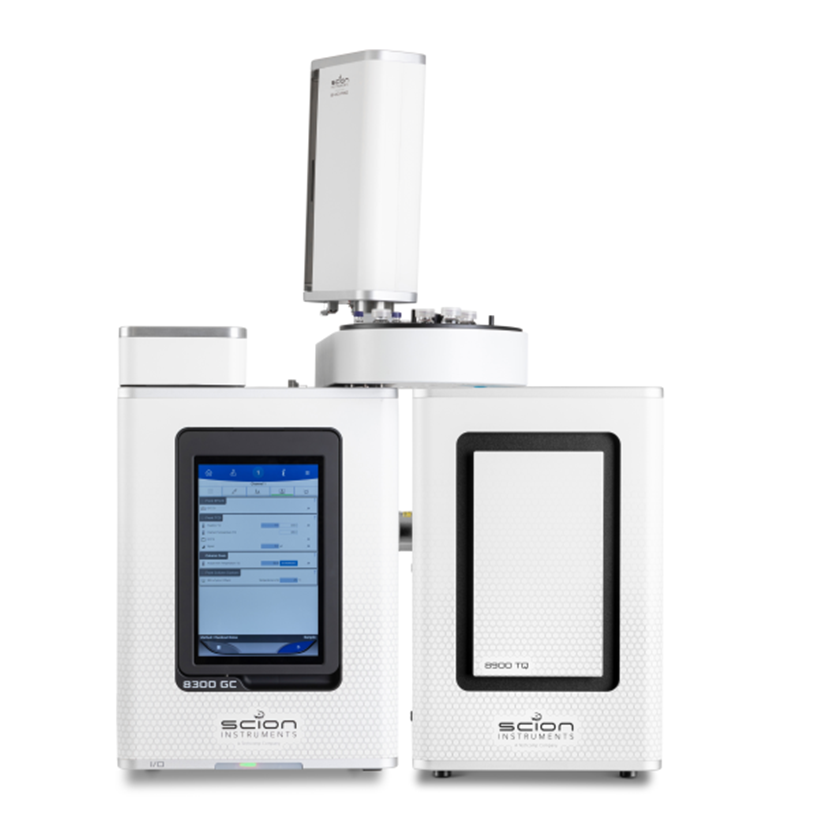 Traditional GC-TQMS analysis of multi-residue pesticides suffers from a lack of sensitivity when many compounds are analysed in a single run , with scan   times below 10ms. In general, longer    chromatographic separations are required in order to save scan times over 10ms resulting in longer  analysis time and lower sensitivity.

The high accuracy and speed of analyses using the 8900 GC-TQMS system, is extremely well suited to meet the laboratory necessities of method throughput and sensitivity for rapid determination of target pesticides.

In this application note, we will explore the ultimate performance of the SCION 8900 GC-TQMS for the simultaneous analysis of 450 pesticides without loss of sensitivity or reproducibility.

GC-TQMS of pesticides is a routine application but multiplexing the analysis of multiple pesticides without losing sensitivity can lead to long assay times. The high MRM speed of the 8900 TQMS coupled to the performance of the 8500 GC can overcome this. The method described uses a short (16 m) column oven program with an optimised backflush for both matrix removal and solvent vent (Figure 2). 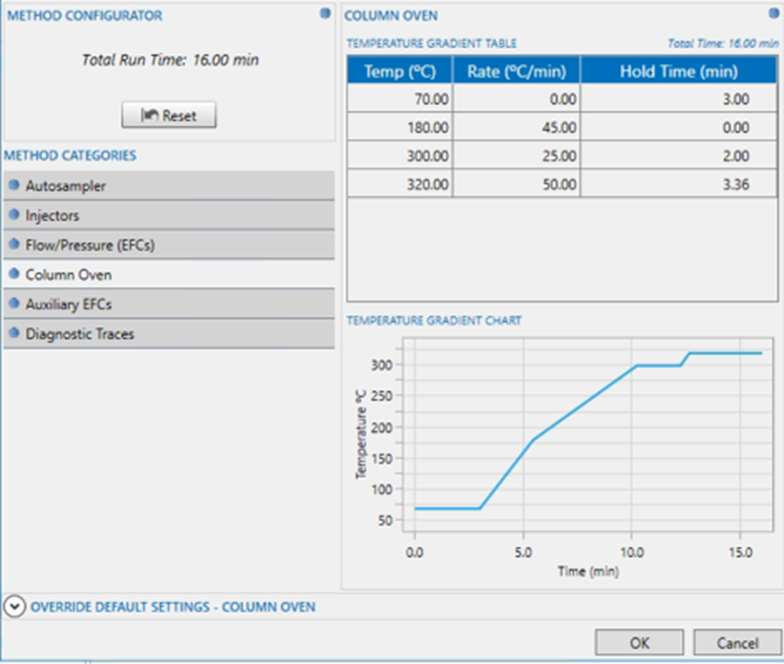 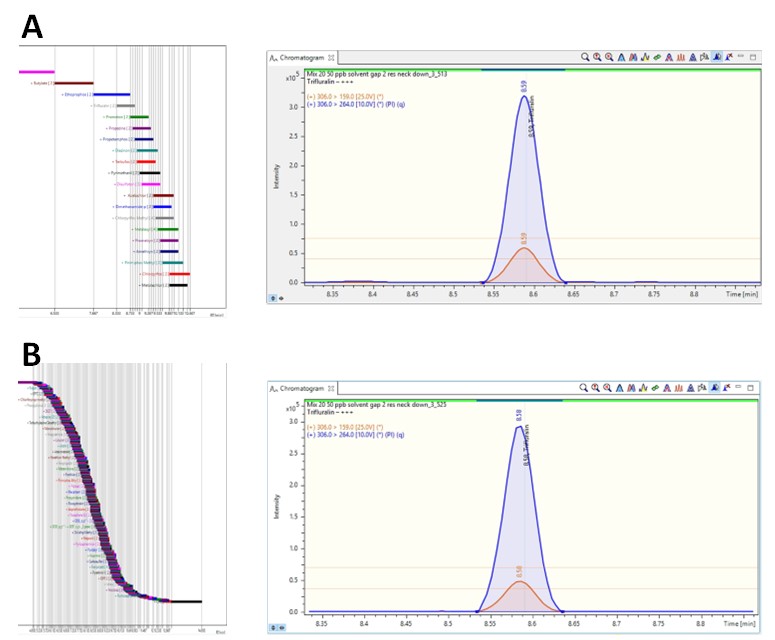 Despite the increase in number of components measured, (Figure 3), the SCION 8900 TQMS maintains good accuracy and linearity at scan times of 4ms. The ion  ratio stability is maintained when switched from 40ms to 7ms scan time. This is maintained even at the lowest concentration of calibration standards (down to 1ppb). Reproducibility is maintained over multiple runs.

Figure 4. Linearity and accuracy is maintained  at scan times of 4ms

Analysis of 450 pesticides in blueberries

A method has been established to identify and quantify 450 analytes from blueberries. The method uses more 1000 MRM transitions over 12 minutes, leading to transitions below 2.5ms. The GC uses the backflush functionality,, which allows backwards carrier flow at the beginning of the injection to avoid non-amenable GC solvents entering the column, and preventing low volatility matrix components to reach the source.

The EFC detector was set to ‘ON’ with a flow rate of 35 ml/min. The Pressure Pulse was also on (40PSI, 0.65 minute pulse duration). The initial split ratio was held at 30% for 0.5 minutes and then 0% for 3 minutes, before switching to 100%. The starting temperature of the GC oven was 70oC for 0.5 minutes, ramping to 300oC at a rate of 200oC/minute and held for 14.3 minutes. The Backflush option was activated with a pressure of 5PSI and a start time of 14 minutes. 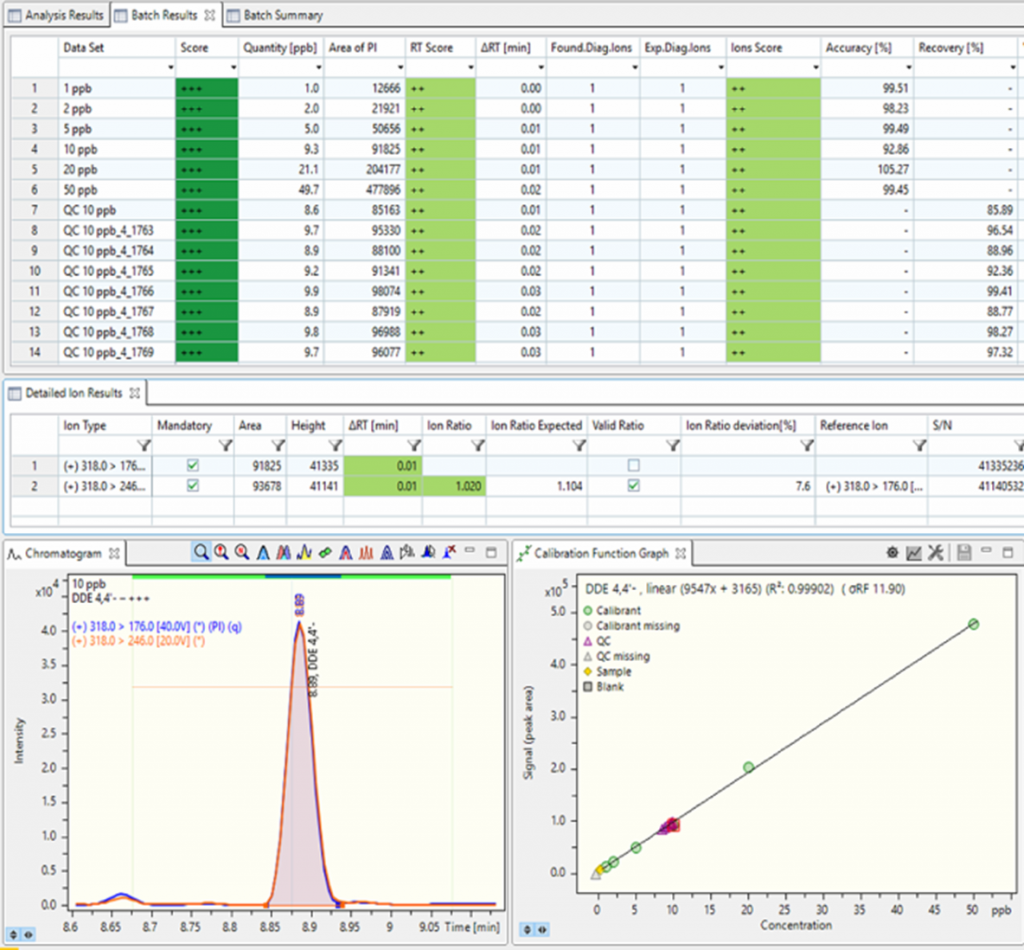 The data showed excellent linearity for standards and QC samples (Figure 5) with perfect ion scores observed throughout the batch. Retention time reproducibility was extremely consistent and good recovery and reproducibility. This reproducibility was consistent through all of the detected analytes. For example,  chlorphenvinfos, an organophosphorous compound that is widely used as an insecticide, was detected at a concentration of 8ppb. The retention time of the compound was 8.45 minutes, which is within 0.02 minutes of the expected RT. The calibration curve had a R2 of >0.998, with a residual of less than ± 20%. 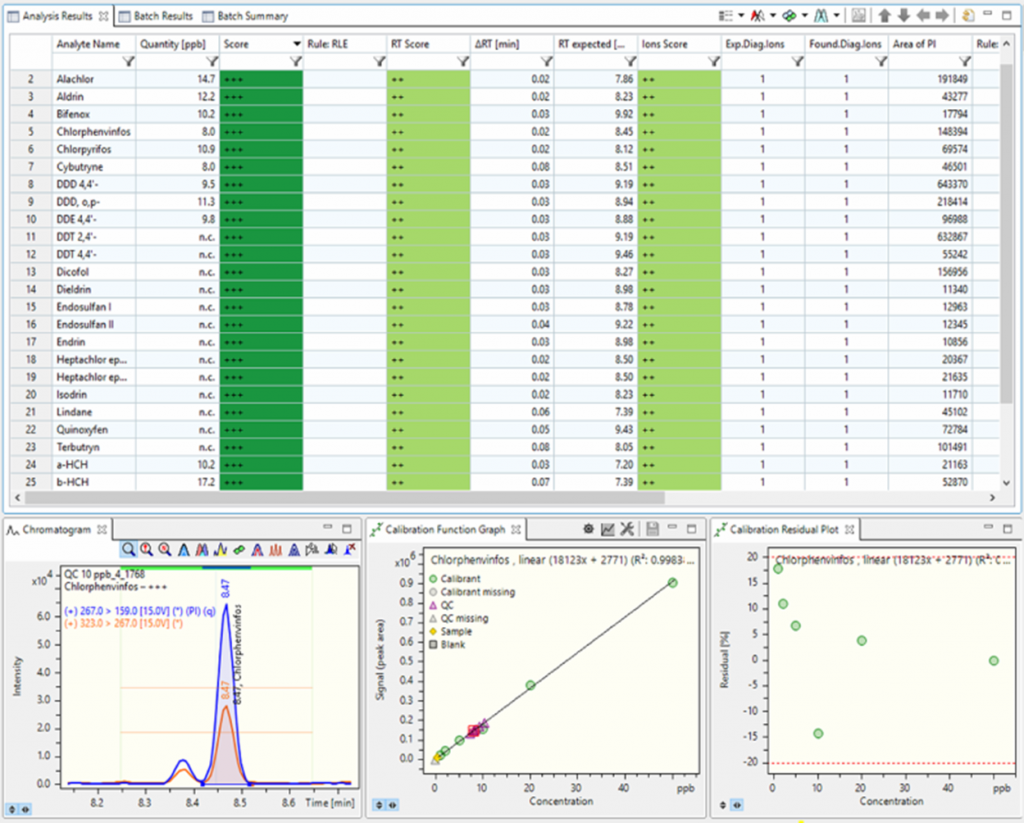 The SCION 8900 TQMS opens up a new possibility for rapid multiplexed screening of pesticides without compromise on sensitivity or accuracy.