SCION Instruments offers the solution for a simulated distillation of heavy distillate and residual fuel oils.

Standardized method IP507 describes the determination of the boiling range distribution of heavy distillate and residual fuel oils, with initial boiling points (IBP) of at least 100°C and final boiling points of (FBP) above 750°C. This method is not applicable for analyzing bitumous samples or petroleum products containing low molecular weight components, such as  naphtha’s, reformates, gasolines and diesels. Hetero atoms, such as alcohols, ethers, acids or esters or residue are not the be analyzed by this method.

Simulated Gas chromatography distillations can be used to replace conventional distillation methods for control of refining operations. Simulated distillations are a safer and faster way to perform an similar boiling range distribution of heavy distillates and residual fuel oils.

This application is applicable on the SCION Instruments 8X00 GC-platform, shown in figure 1. 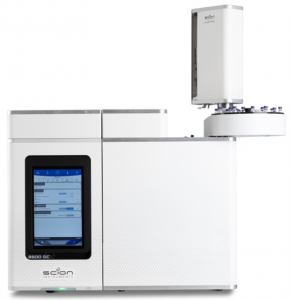 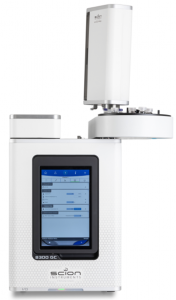 The SCION SIMDIST analyzer used for this application, comprises of a small footprint 8X00-GC, configured with a temperature programmable air cold on column (COC) injector with air cooling, a SCION SIMDIST column and a Flame Ionization Detector (FID) with ceramic HT flame tip.

A 8400PRO Autosampler was used in Standard On-Column mode. Standards were prepared in CS2 and used to determine system performance and response factors. A qualitative mixture of normal paraffins covering the range from C5 up to C120 was used to determine the relationship of boiling point (BP) versus retention times (RT). CS2 blanks were run and evaluated for cleanliness of the blank, for blank subtraction.

After running a calibration standard sample, the septum purge time is switched open after elution of the C120 peak, for cleaning the system for the next injection. This action is shown in figure 2, 4 and 6 at 40,5 minutes. 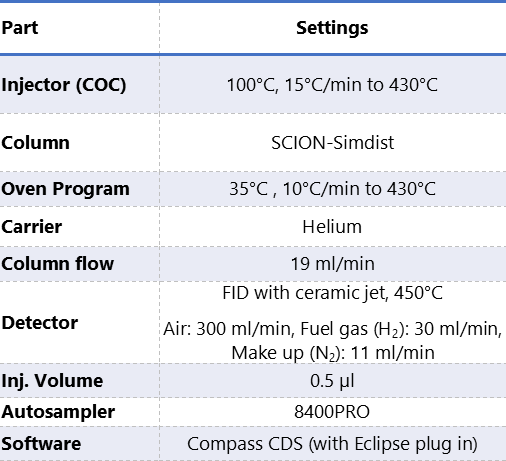 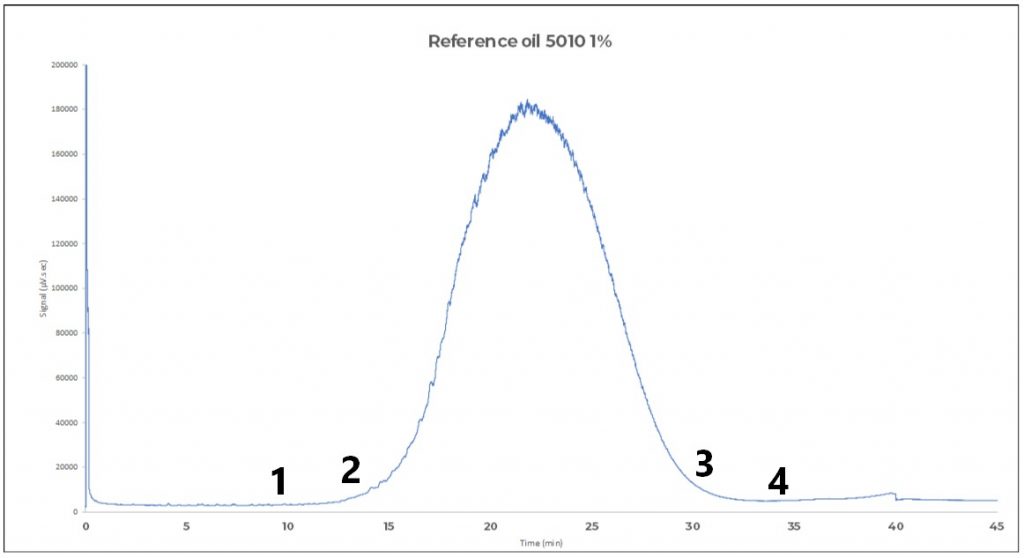 The results in table 2 show that all the critical points are within allowance. 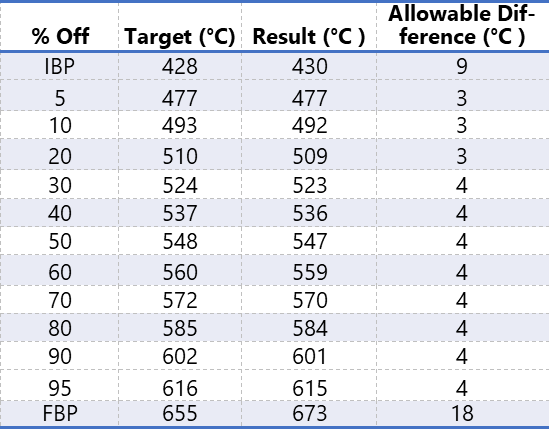 Repeatability of the reference oil is determined  by analyzing 5 times the same sample consecutively. RSD(%) of the 5 measurements is 1.36%, which is excellent for simulated distillations.

A calibration sample is injected for identification of the n-alkanes during analysis of an unknown sample. 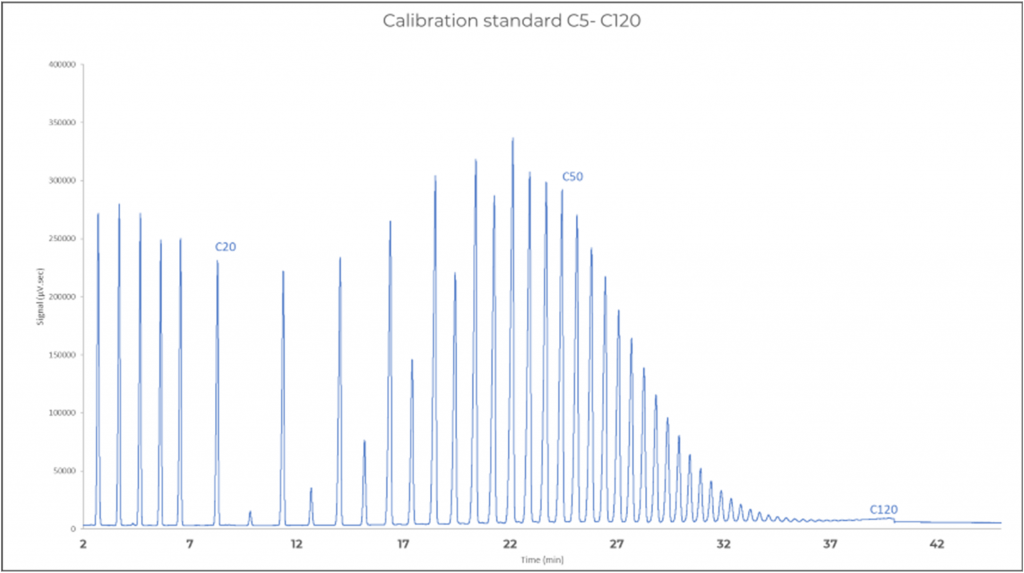 The resolution of the column can be determined by using the C50 and C52, peaks and following equation:

Another critical point is the peak skewness of peak C20 at 5% peak height. A good peak skewness  ratio shall not be less than 1 or greater than 3. The skewness of the C20 peak is with 1.04 within specification.

Figure 5 is showing a chromatogram using the Compass Eclipse software plug in, with combined Retention time vs boiling point curve. 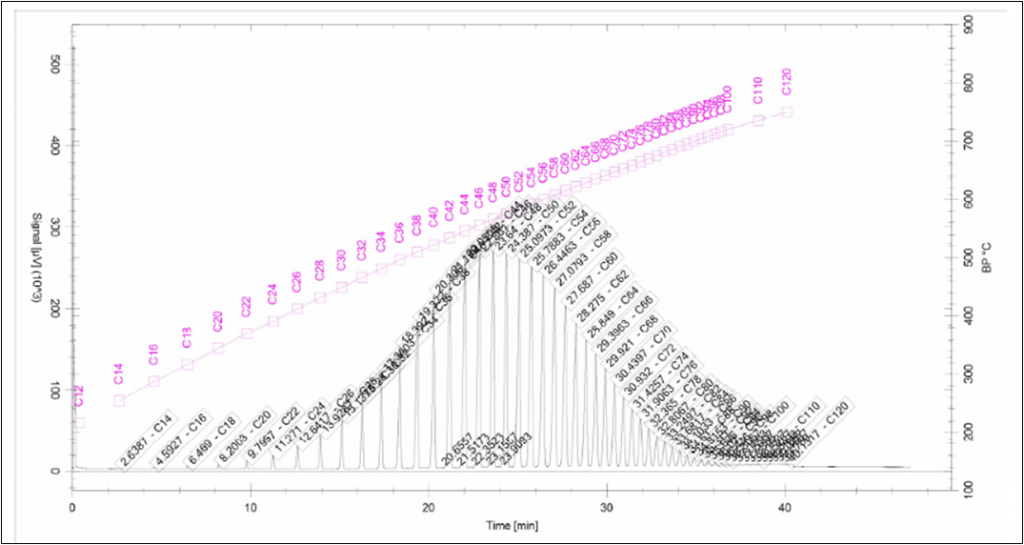 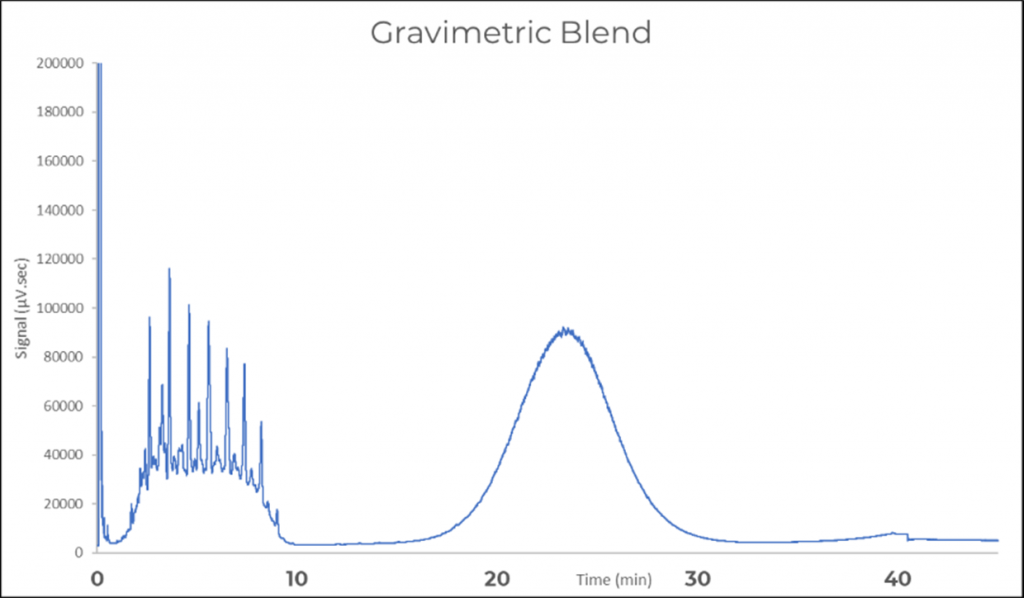 Calibration standards, of each target analyte, were prepared at a range of 0.2mg/L to 20mg/L in acetonitrile.

The analytical conditions of the analysis can be found in Table 1.

The SCION Instruments  8X00 GC-platform provides a robust and complete solution for the simulated distillation of heavy distillates and residual fuel oils, following standardized method IP507. The obtained results demonstrate that this method and SCION Instruments system configuration is excellent and meets all the required limits for IP507.

The equipment of the 8X00-GC analyzer is pre determined, for ordering information or customisation please contact your local sales representative.

Although the 4X6-GC series is not shown in this application note, it is possible to perform this analysis on the SCION instruments 4X6 GC series.