Manufactures of materials used in these environments have quickly responded to reduce or remove VOC’s and SVOC’s from their processes to reduce or eliminate these compounds concentration in enclosed areas, thus improving the quality of the indoor air.

The VOC’s and SVOC’s from high temperature (HT) polymers is typically determined with thermal desorption methods instead of headspace.  These HT polymers have glass transition and melt temperatures well above 200°C, which is typically the upper limit of most commercially available headspace instruments.

The SCION Instruments HT3 headspace instrument however has an upper sample heating temperature of 300°C. 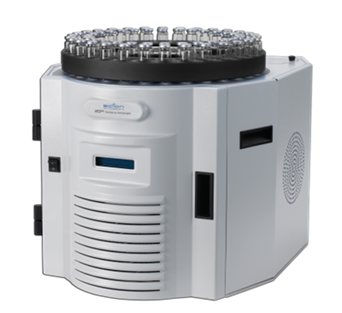 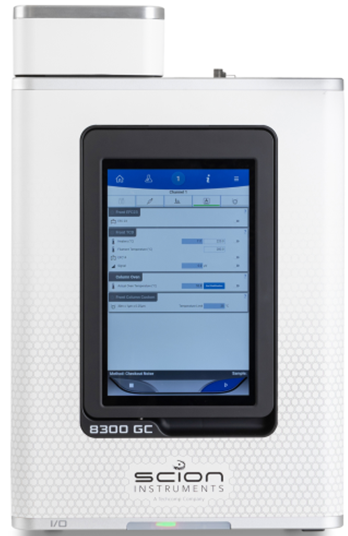 Thermal desorption instruments limit the sample size to the internal diameter of the thermal desorption tube, 4 mm.  Large solid samples must be reduced in size by mechanical methods, which can heat the sample releasing VOC’s and SVOC’s prior to the analysis.  This could create a false negative result.

A sample assayed with a headspace instrument can be up to 11 mm wide, the size of the vial opening and 60 mm long, the depth of the vial, thus allowing minimal to no mechanical resizing of the sample.

This paper documents the assay of a HT polymer with SCION Instruments HT3 Static headspace instrument at 280°C.  This temperature is above the glass transition temperature of the HT polymer at about 200°C and is below its melt temperature of 300°C.  The HT polymer was tested to compare the VOC’s and SVOC’s released during headspace analysis to the current thermal desorption method. 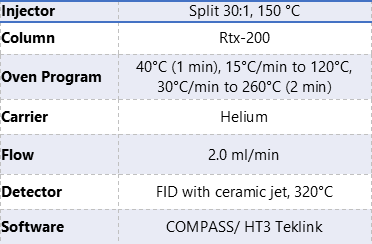 A HT polymer was obtained as raw pellets.  Four sample weights, 1 g, 2g, 4g, and 8g, were weighed into 22 mL headspace vials.  These were capped and sealed with Teflon lined septa. The sample weight range will provide data to determine the linearity of the VOC and SVOC peaks observed in the sample.

A standard was prepared by dissolving 100 mg of one of the expected VOC’s in 5 mL of methanol and placing 50 µL into a 22 mL headspace vial.  The vial was immediately capped and sealed with a Teflon lined septa. The samples and standard were assayed with the SCION Instruments HT3.

Compound 10 was present at approximately 500 times greater than the other 14 compounds.  These remaining 14 compounds are displayed on scale as inserts in Figure 2 prior to and after compound 10, because of their lower concentration.

Compound 14 was not well resolved from a system peak and its integration from the system peak introduces some error. 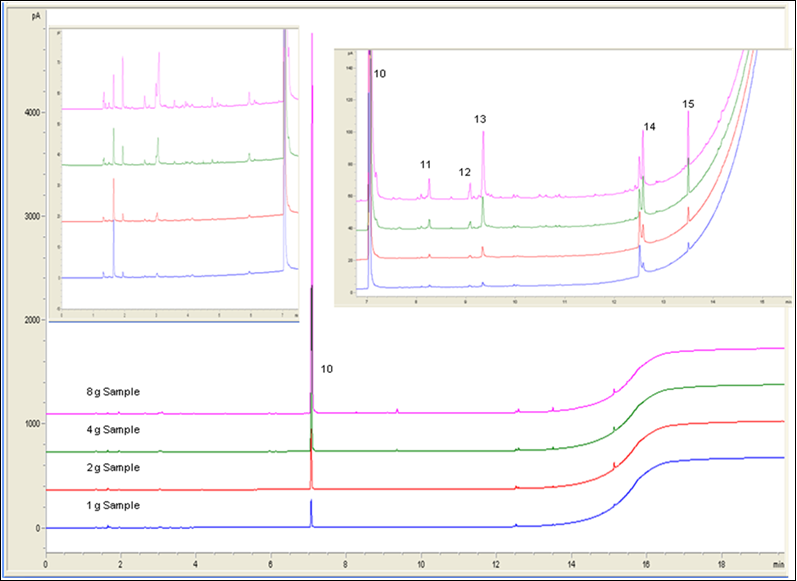 Table 2. Peak Area and Correlation Coefficient Data of the VOC and SVOC Compound for the Four Concentrations of HT Polymer Samples.  The parts per million (ppm) is Calculated with the Peak Areas of the Standard Listed at the Bottom of the Table and the 8 g Sample.

Fifteen VOC’s and SVOC’s were detected by static headspace analysis.  All of the compounds exhibited good linearity, indicating that the headspace method provides reproducible results.  The ppm concentration of Peak 10 obtained with the HT3™ method is consistent with the result obtained by the thermal desorption method.

The sample preparation by the HT3™ method was minimal, with the sample pellets placed directly into the headspace vials instead of being mechanically reduced.  The pellet size did not have to be reduced to fit into a 4 mm ID thermal desorption tube.

If you wish to keep up to date with SCION Instruments latest research and articles, follow us on social media and sign up to our newsletter below