IP601 describes a standardized method for the determination of light hydrocarbons in stabilised crude oils up to and including n-nonane(C9). IP601 is issued under the fixed designation of ASTM D7900. For a full range of boiling point distribution of crude oils (>n-C9) this method can be combined with standardized method IP545 or ASTM D7169.

This application is applicable on the SCION Instruments 4X6 and the new 8X00 GC-platform, shown in Figure 1, equipped with the 8400PRO autosampler.

Table 1 is showing the analytical conditions of the GC method. 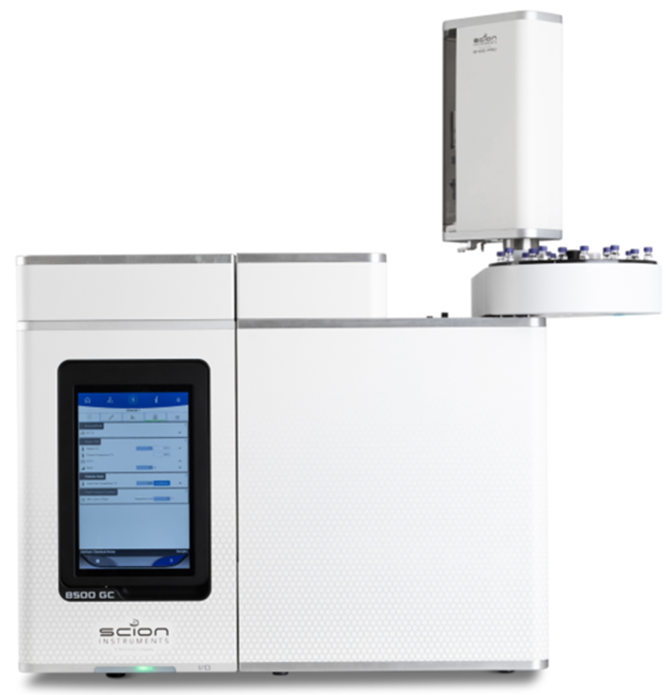 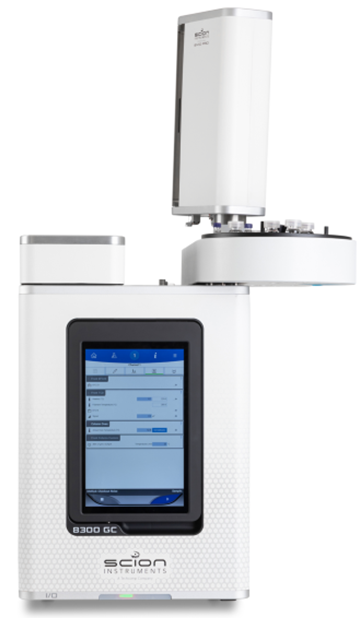 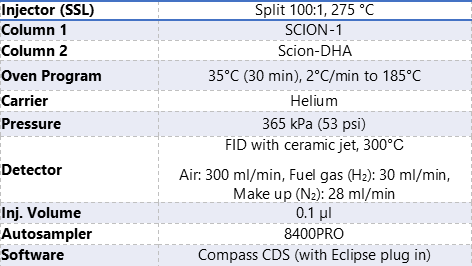 The Eclipse software plug in makes it easily to merge these 2 methods for a reliable full boiling range distribution for the analysed crude.

Repeatability of the system and method is checked by analysing consecutively 6 times the reference calibration mixture of n-paraffins. Table 2 shows the repeatability results of the DHA  IP601 analyzer. The analyzer is capable of achieving excellent results with an RSD below 1% for all components. 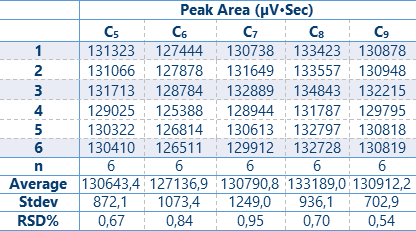 A reference calibration mixture C5-C9 is injected on the system for identification, see figure 2.

The identification of compounds is based on the Kovats index, generated by the Eclipse software plug in. The usage of this index has the advantage that it only depends on 2 psychical properties, in comparison with retention time who depends on 6 physical properties.

The calculated indices are compared with known data in the database and the rest of the peaks are assigned accordingly. Based on this standard, the composition of the crude oil front-end can be identified and the boiling point distribution can be calculated.

A crude oil is injected on the system as an unknown sample. Figure 3 shows the chromatogram of the crude oil. In the chromatogram a select group of compounds are named. With the Eclipse software plug in all components are successfully identified.

Table 3 shows the group report of the crude oil in mass (%). Based on the mass report and internal standard, a boiling point distribution was made, shown in table 4.

A critical point of attention during this analysis is the resolution between the hexane peak and 1-hexene peak (internal standard) a good resolution shall be at least 2 listed in the IP601. The resolution in figure 3 between the peaks of interest is 2,33.

Table 3. Group report in mass% of the crude oil 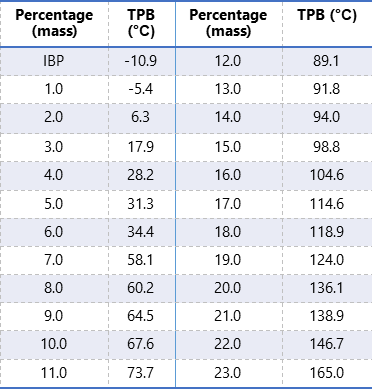 Figure 4 shows an example of the merged crude oils distribution report in Eclipse. The front end boiling point distribution (<151°C) is based on the DHA IP601 data and is shown in blue. The back end of the crude boiling point distribution(>151°C)  is based on standard method IP545 and is shown in black. Figure 5 shows an example of how the chromatogram looks like in the Eclipse plug in software, and the available standardized methods to select. 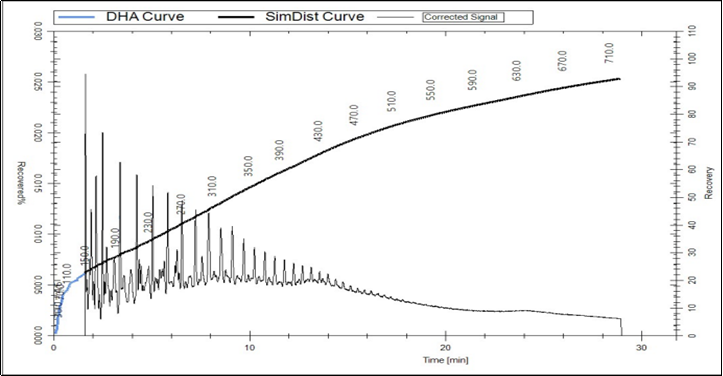 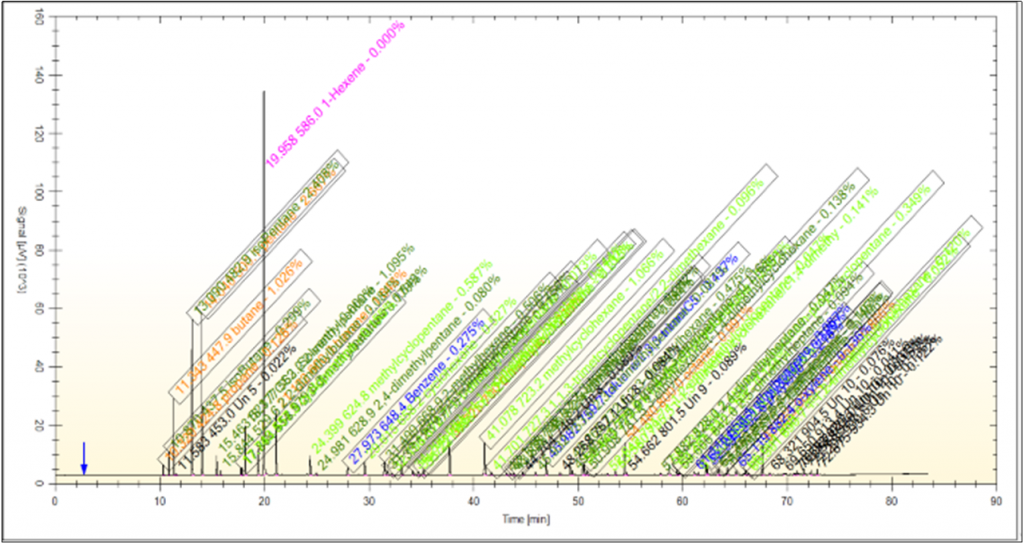 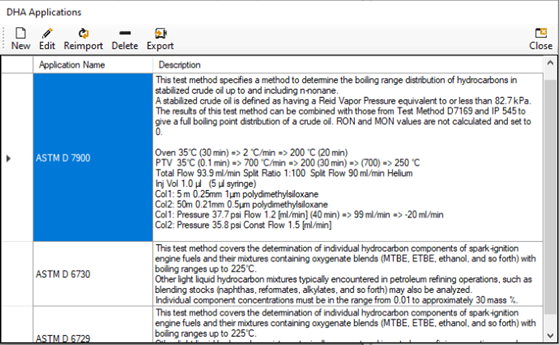 Figure 5:  Chromatogram of a crude oil sample using the Compass Eclipse plug in.

The Compass CDS Eclipse plug in is used for analysing the data. IP601 is related to method ASTM D7900, the obtained results are calculated in Eclipse according to ASTM D7900. The plug in is an addition to the basic Compass CDS and this will provide all the tools to calculate the necessary data.

The SCION 8X00-GC analyzer is perfectly capable of analysing the boiling point distribution of the crude oil front end in compliance with IP601. The analyzer easily achieves the specifications mentioned in the standardized method.

If a full boiling point distribution is desired it is possible to merge this method with method IP545.

The equipment of the 8X00-GC analyzer is pre determined. Ordering information can be found  on the next page. For customisation please contact your local sales representative.

Although the 4X6-GC series is not shown in this application note, it is possible to perform this analysis on the SCION Instruments 4X6 GC series. 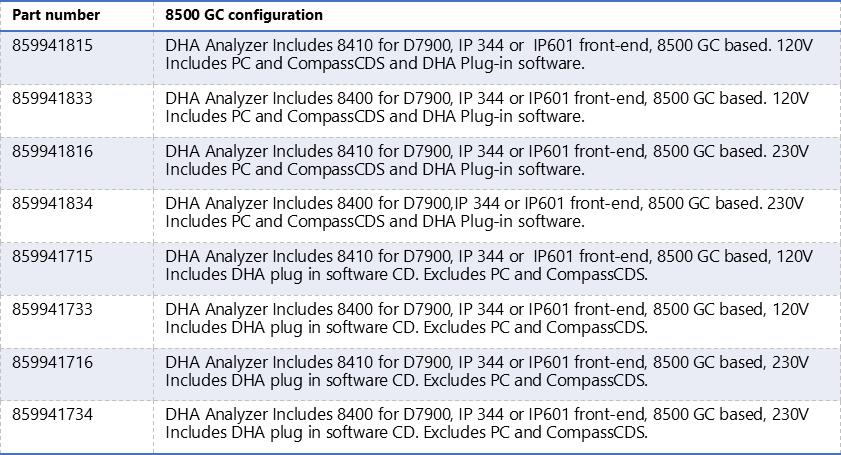 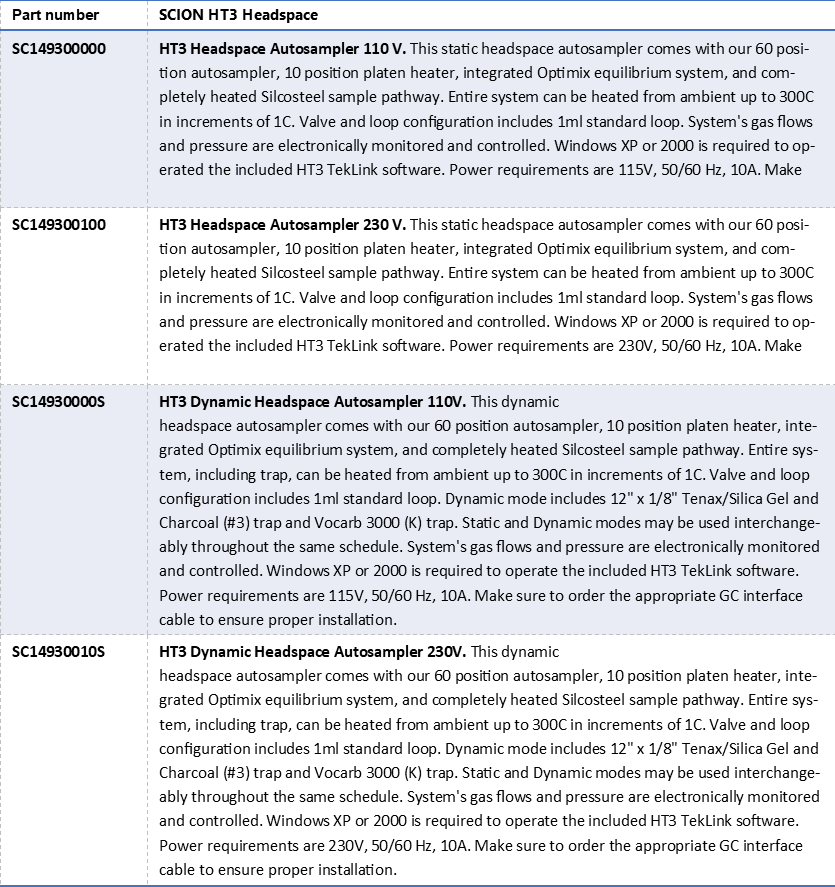 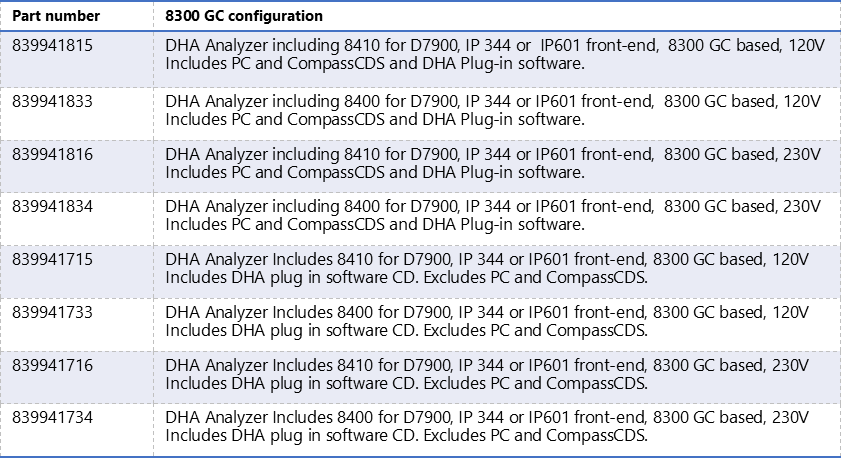 If you would like to find out more about the 8X00 GC Series and the best instrument for your laboratory, contact our sales team who will be happy to speak with you.

If you wish to keep up to date with SCION Instruments latest research and articles, follow us on social media and sign up to our newsletter below