There has been a growing demand for the analysis of oils, fats and fat containing food products especially surrounding the edible oils market. The most common analysis of such products are the determination of fatty acid methyl esters (including cis and trans isomers and omegas.

ISO-12966 (4) specifies the method for the determination of FAMEs by capillary gas chromatography The method covers FAMEs from C 8 to C 24 and can be applied to crude, refined and hydrogenated fats/oils which are derived from both animal and vegetable sources, not including dairy or milk products.

SCION Instruments developed a method, using ISO-12966 (4) specifications, for the determination of 37 FAMEs using base esterification for sample preparation.

A SCION 456 GC with FID was used for the determination of 37 FAMEs in culinary argan oil A FAME multi mix reference standard (C 4 C 24 1 was prepared with a 1 in 2 dilution in hexane Six commercially available culinary argan oil samples were prepared using a base esterification process The process can be found in Figure 1.

Analytical conditions of the analysis can be found in Table 1. 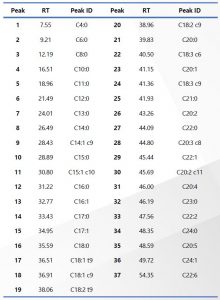 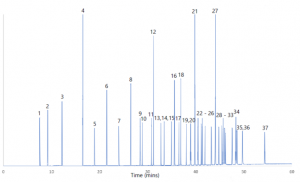 Following complete separation of all 37 target compounds, the six argan oil samples were analysed Peak identification was automated using the retention times from the reference standard, using CompassCDS software Figures 3 8 show the obtained chromatograms for each sample Chromatograms are scaled to show only the section containing identified FAMEs. 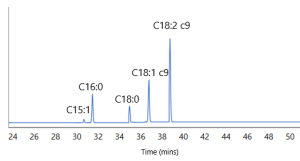 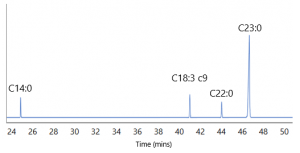 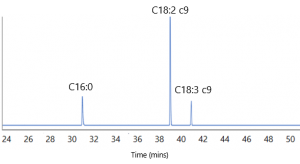 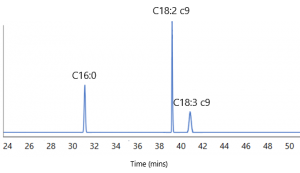 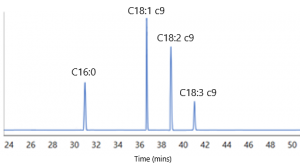 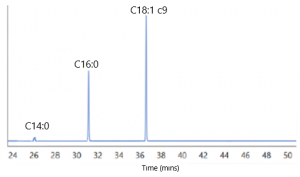 Out of the six argan oils analysed, only two contained the exact same FAME profile, that was oils 3 and 4 which was expected as the two oils were manufactured by the same brand All six argan oils contained C 18 isomers The cis isomers identified have corresponding omegas Omega fatty acids are important dietary fats that have numerous health benefits Table 3 details the identified isomers and associated omegas.

The FAMEs identified throughout this analysis was expected due to the fat composition of the argan oil Argan oil contains both monounsaturated and polyunsaturated fats, as identified by the cis isomers/ omega 3 6 and 9 and not contain any trans fats [1]. 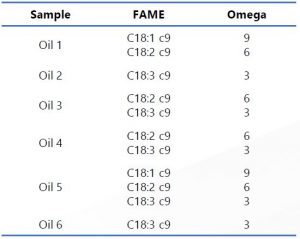 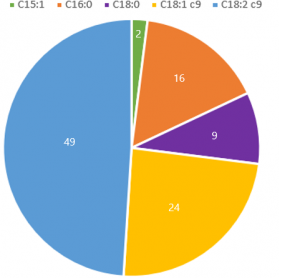 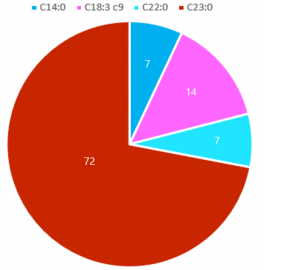 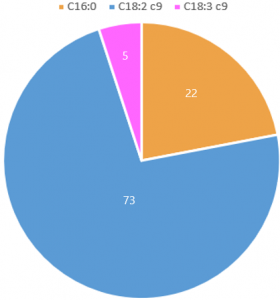 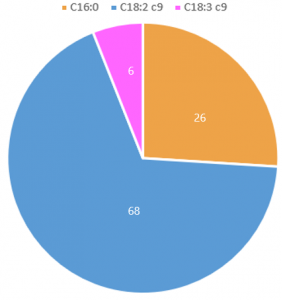 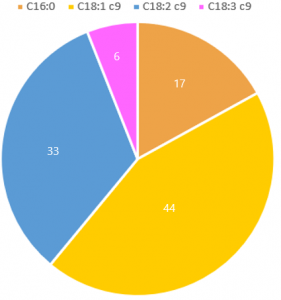 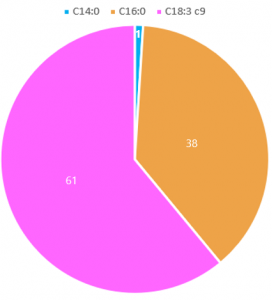 The normalised results show that the major components in five of the six argan oils are Omega, 3 Omega 6 and Omega 9 An independent study on the fat composition of argan oil determined that the typical unsaturated fat content of high quality argan oil was approximately 80 [1] Figure 15 shows the monounsaturated, polyunsaturated, total unsaturated and saturated FAME content of each sample.

As shown in the figure above, only one of the six argan oils analysed contained a unsaturated fat content greater than 80%. Four of the remaining oils were close to the recommended 80% with a values of 73, 72, 78 and 74, respectively. The final oil sample had a low unsaturated composition of only 61%. This FAME analysis shows the variance in the quality of argan oils being sold commercially.

SCION Instruments developed a method for the complete separation and identification of 37 Fatty Acid Methyl Esters in edible oils Six argan oil samples were analysed with the compositional analysis of FAMEs in the sample performed CompassCDS software offers automated data processing and compound identification High levels of Omega 3 Omega 6 and Omega 9 was observed in five of the six argan oils.

SCION Instruments offers a first-in-class Gas Chromatography and Chromatography Data System solution. For further information on our products why not get in touch. We’d be delighted to help you with your requirements.