Physical distillation is still considered the reference method for distillation. Simulated distillation (simdist) by gas chromatography offers some significant advantages over the physical procedure, making this technique quite useful. Analysis by GC typically has the better precision, higher throughput, less hands-on time, and lower cost per sample. Also, Simdist requires considerably less sample to be run and can generally be considered the safer of the two techniques. Simdist is very suitable to characterize crude oils.

Simdist method ASTM D7169 is widely used for determining the boiling point distribution of crude oils up to a final boiling point of 720°C. However, this method will give an incomplete result for the separation of C4-C9, due to the thin film column in the presence of large amounts carbon disulfide. This problem can be solved by combining the results of ASTM D7169 with results from another gas chromatograph (GC). A GC configured for ASTM D7900. This method will analyze the light end fraction of the crude oil, up to and including nonane. Results of both methods are merged into one boiling point distribution, which will give a more accurate data range of the crude oil.

This method can also be used to obtain the boiling point distribution of samples that do not fully elute, such as atmospheric and vacuum residues. The amount of residue (or sample recovery) is determined using an external standard. This provides insight into composition and allows for the determination of intrinsic product value.

A qualitative mixture of normal paraffins covering the range from C5 up to C100 is used to determine the relationship of boiling point (BP) versus retention times (RT). Reference oil 5010, which fully elutes from the column, is used to determine the detector response factor. CS2 blanks are run, and the resulting signal is subtracted from the response standard and the samples. Samples are injected and with the use of the response standard the recovery of the sample is calculated. A boiling point distribution can be calculated up to the recovered amount. Customized cut point reports can also be calculated.

An internal standard is quantitatively added to the crude oil. A small amount is injected onto a precolumn. When the front-end fraction (<C9) has reached the analytical column, the precolumn is backflushed to vent the higher boiling components.

The components are identified by comparison of reference chromatograms and the Eclipse database; the DHA/Simdist software. Eclipse can group individual components by hydrocarbon type. According to the composition of the frontend fraction the boiling point distribution will be calculated.

See table 1 for the analytical settings of both methods.

Figure 1 shows a stable baseline and a CS2 injection free of any hydrocarbon interferences. Figures 2 and 3 show a chromatogram of the normal paraffins calibration standard and the chromatogram for reference oil 5010.

Reference oil 5010 was analyzed to verify that requirements of ASTM D7169 are met using this configuration. Table 2 clearly shows the analytical results obtained for this reference material passes criteria for acceptance. 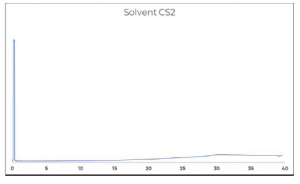 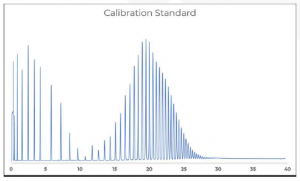 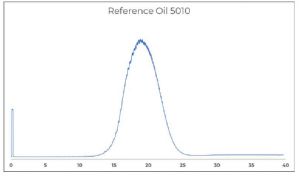 A calibration mixture containing n-alkanes was used to calculate the Kovats indices of all components in the front-end fraction. The Kovats indices were compared with known indices in the database and peaks were assigned accordingly. Figure 4 shows a C5-C9 n-paraffin calibration standard. Based on this standard, the composition of the crude oil front-end can be identified and the boiling point distribution will be calculated. 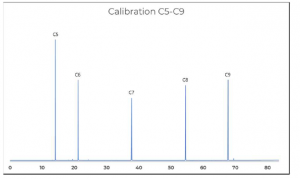 The front-end of the crude oil, with 1-hexene as internal standard, was injected onto the ASTM D7900 channel. Figure 5 shows the chromatogram of the front-end analysis. 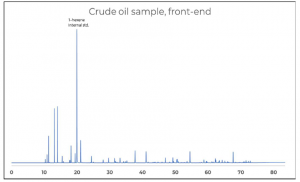 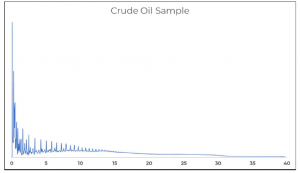 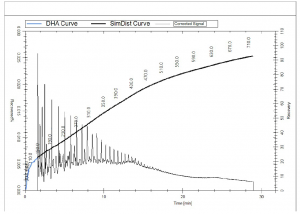 Simulated distillation can provide a very suitable alternative for conventional distillation methods. They typically provide a much more robust, economical, safe, automatable, and easy solution for obtaining accurate boiling point and cut point data for petroleum products, feedstocks and other petroleum fractions as specified in these different methods.

For crude oils with a significant light end it is advised to combine a High temp Simdist ASTM D7169 with a front-end DHA ASTM D7900. Due to large amounts of CS2 the simdist method will give an incomplete result for the separation of C4-C9. Front-end DHA ASTM D7900 will cover this analysis. Merging data from both methods will give a more accurate data range of crude oil. A complete boiling point distribution can be calculated. Customized cut point reports can also be made.