Hemp and marijuana are becoming more popular because of legalization in multiple countries. The increase of this market also increases the offer of products that contain very different levels of cannabinoids than the content described on the label. Therefore, as quality control it is important to monitor the level of cannabinoids.
This application focusses on the analysis of potency using the GC-MS. SCION Instruments has an extended portfolio including potency analysis with an FID (AN091, 92, 93 and 130), terpene analysis (AN133 and 136) and Residual solvents analysis (AN139).
This application is applicable on the SCION Instruments 4X6 in combination with the SCION single quad (SQ). But the analysis was performed on the SCION Instruments 8X00 GC series with the new 8700 SQ mass spectrophotometer shown in figure 1. 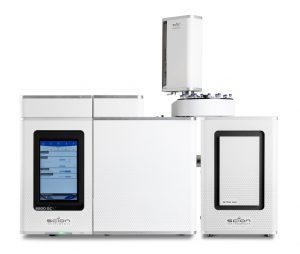 This analysis can be implemented on the 8300-GC and the 8500-GC platform. The analysis was performed on the SCION Instruments 8500-GC analyser equipped with SQ MS and SCION 8400PRO autosampler.
The analysis of these components can be done using a GC with a FID detector, but it is also possible to use a Mass Spectrometer (MS) like described in this application note.).
The focus of this method lies on six components (see table 1): CBC, CBD, Δ8-THC, Δ9-THC, CBG and CBN. Unfortunately, CBDV, CBGA, THC-A and CBDA cannot be detected without extra sample preparation due to decarboxylation caused by the heat of the injector. Decarboxylation is the removal of a carboxyl group releasing carbon dioxide. CBDV decarboxylates to CBD, CBGA to CBG, THC-A to THC and CBDA to CBD.
A different detection method is HPLC, in this case it is also possible to detect THC-A, CBDA, CBDV and CBGA without extra steps. 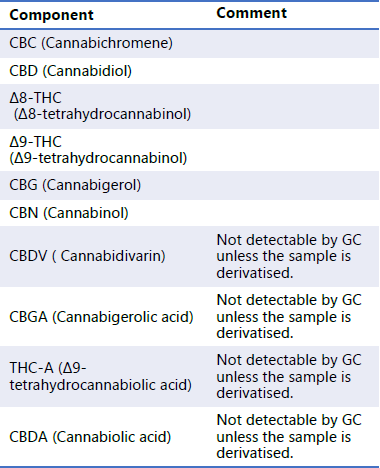 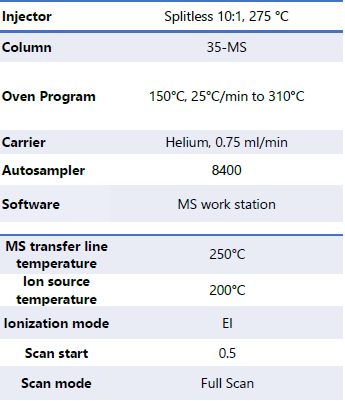 Using the potency analyses it is possible to identify and measure their concentration as an indication of the strength of the product. There are over 500 chemical compounds in Cannabis, the most tested cannabinoids are discussed in this application note.
Consumer hemp generally comes in the form of hemp oil which is used for medical purposes while marijuana is often smoked. Keep in mind that both samples need different sample preparation before analysis due to the difference in sample matrixes.
Cannabis oil only needs to be diluted with methanol, for the medical marijuana a bit more preparation is necessary.
In order to extract the potency from the medical marijuana, it had to be dried for 2 hours, after that it had to be grinded. 30 ml of methanol was added and placed in an ultrasonic bath for 30 minutes. Evaporate to dryness, reconstitute in methanol.
The Quality Control (QC) sample was made from 20 μg/ml for all components.

The precision of the method was obtained by seven consecutive injections containing 20 μg/ml of each component. It was shown that the RSD for the components all lie below 2.0 %. which is an excellent result for this method. The repeatability of each component can be found in table 3.
All the chromatographic peaks were identified with the NIST library. Figure 2 shows examples of these target peaks from a 20 μg/ml standard containing a mix of all the components.
The calibration curves for the potency standards were prepared between 1 to 100 μg/ml. All the potency components had a correlation (R2) greater than 0.999 which is perfect for this application. Figure 2 shows the calibration curves for all the components. From the linearity the limit of detection (LOD) and limit of quantitation (LOQ) were calculated. The QC control sample was analysed using multiple injections, the average concentration are shown in table 3 together with the LOD and LOQ.
The medical marijuana did not come with an index stating it’s content. Analysis confirmed a greater amount of CBD in comparison to 9-THC (table 3), concluding that this is indeed medical marijuana.

The SCION 8X00-GC analyser equipped with a split/spitless injector, Scion Instruments column, SQ-MS and 8400PRO autosampler is perfectly capable of potency analyses in a qualitative and quantitative way. 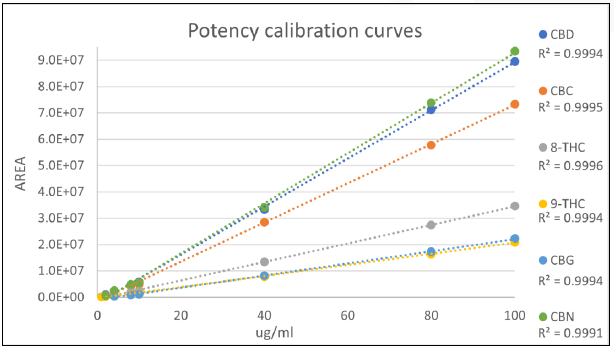 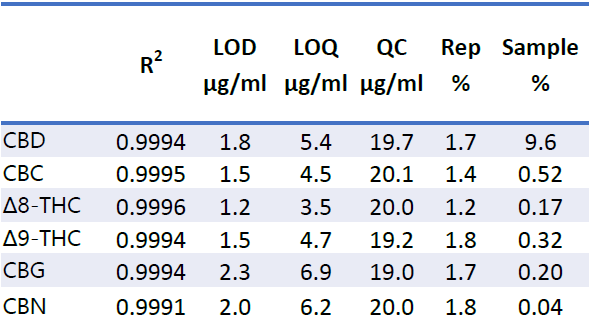 Although the method developed is well suited for potency analysis it is confirmed that one of the disadvantages of this method is that the acidic form of the potency components is converted in the hot injector.
Although the 4X6-GC in combination with the SCION SQ is not shown in this application note it is possible to perform this analysis on the SCION Instruments 4X6 GC series in combination with the SQ.