Marijuana usually contains high levels of Δ9- THC and a lower level of CBD, with hemp it is the other way around. The primary psychoactive component is Δ9-THC, while CBD is the primary
therapeutic component.

This analysis can be implemented on both the 436-GC as well as on the 456-GC platform. The Scion 436-GC analyser used for this application is equipped with an 8400 autosampler. The analysis of these components can be done using a GC with a FID detector, but it is also possible to use a Mass Spectrometer (MS). A different method is using a HPLC, in this case it is also possible to detect THC-A, CBDA, CBDV and CBGA with extra sample preparation
(derivatization).

The focus of the calibration lies on six components: CBC, CBD, Δ8-THC, Δ9-THC, CBG and CBN. Unfortunately, CBDV, CBGA, THC-A and CBDA cannot be detected without extra sample preparation due to decarboxylation caused by the heat of the injector. Decarboxylation is the removal of a carboxyl group releasing carbon dioxide. CBDV decarboxylates to CBD, CBGA to CBG, THC-A to THC and CBDA to CBD.

The Quality Control (QC) sample was made from 30 µg/ml for all components. Different products were examined to determine potency. Cannabis oil and medical marijuana were chosen in this study.

The cannabis oil was diluted with methanol, for the medical marijuana a bit more preparation was necessary. In order to extract the potency from the medical marijuana, it had to be dried for 2 hours, after that it had to be grinded. 30 ml of methanol was added and placed in an ultrasonic bath for 30 minutes. Evaporate to dryness, reconstitute in methanol. When looking at the settings of the GC it is important that the injector temperature is high enough to prevent carry over. Carry over can occur from previous runs or extra material that is being introduced into the system.

The chromatogram in figure 1 shows carry over from the previous run. When the injector temperature was increased it showed that the carry over disappeared (see figure 2). Another solution for this problem could be a washing method between samples.

Both figure 1 and 2 are examples from Scion Instruments application note AN091 which explains the analyses of potency using a helium carrier gas instead of nitrogen. 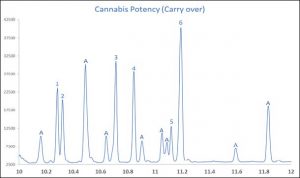 Figure 1. Chromatogram of a potency standard showing carry over (A) using helium carrier gas (AN0091). 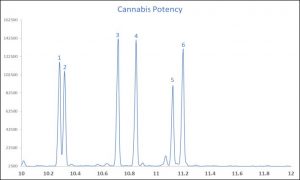 *With helium carrier gas 1 is CBD and 2 is CBC, the switch of the components is caused by using a 5 5-ms column instead of a 35MS 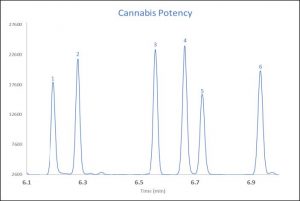 When looking at the chromatogram of figure 3 it is shown that all components are base line separated, this means accurate quantitation can take place. In addition to these results, it is shown that the peak tailing factor (PTF) of all components is smaller than 2. CBC 1.1, CBD 1.0, 8 8-THC 0.99, 9 9-THC 1.0, CBG 1.1 and CBN 0.99. This overall is an outstanding result.

The calibration curves for the potency standards were prepared between the 2 to 100 µg/ml. Figure 4 shows the calibration range for all the standards and it showed that all the correlation
coefficients (R R2) bigger than 0.999 which is exceptionally good.

According to the label of the oil sample it should contain 100 mg of CBD, other components were not mentioned on the label After analysis it showed that the oil sample contained 65.5 mg CBD, CBC, 8THC and 9 THC were also detected, unfortunately these were below the LOQ, it also shows that CBG and CBN were not present in this sample.

The medical marijuana did not come with an index stating it’s content. Analyses showed it contained 1.7 % CBC, 12.8% CBD and 1.3% 9 THC. 8 THC and CBG were detected but the concentration was below the LOQ,. CBN was not present in this sample.

Figure 6 shows an example chromatogram of the oil and medical marijuana sample. 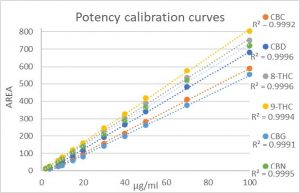 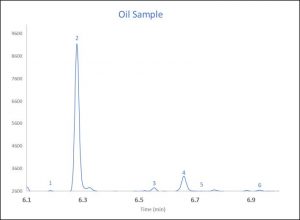 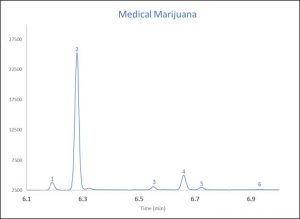 Figure 6. Chromatogram of an oil and medical marijuana sample

The Scion 4X6-GC analyser equipped with a split/spitless injector, Scion Instruments column and FID is capable of analysing potency from cannabis products in a qualitative and quantitative way.

Although the method developed is well suited for potency analysis it is confirmed that one of the disadvantages of this method is that the acidic form of the potency components is converted in the hot injector. It should be kept in mind that the levels of CBD, CBG and 9-THC in this case is a summation of the non-acidic and acidic form. If the acidic form has to be analysed it is advised to perform extra sample preparation or another analysing method in the form of a Scion Instruments 6000 HPLC method can be chosen. 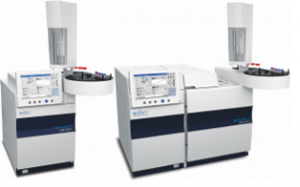