Analysis of dioxins by GC-TQMS 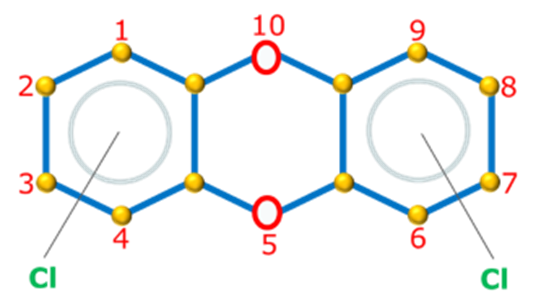 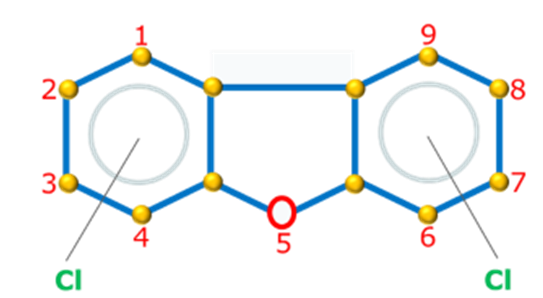 Dioxins are anthropogenic compounds produced  unintentionally as by-products in some industrial activities and waste combustion processes, mainly. In addition to be present in the environment, dioxins are fat-soluble and bio-accumulative compounds in the tissues of animals and humans. Consumption of food is the more important exposure for humans, in particular, fish, shellfish, dairy products and meat.

Dioxins can invoke serious health effects in humans  such as loss of body weight, hormone disruption, reproductive disorders, skin toxicity, immune system disorders and cancer, among other diseases. Since 2014, GC-MS/MS is an EU-accepted technique as confirmation  method for dioxin analysis in accordance with EU 589/2014 and subsequent regulations implemented in this regard. 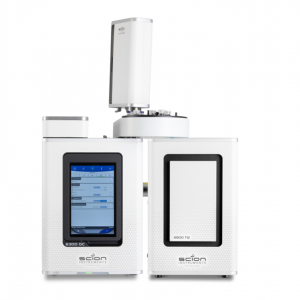 GC-HRMS of dioxins in food and environmental samples has been the approved technique for most regulatory bodies due to high selectivity and sensitivity.

Therefore, since 2014, GC-MS/MS is an EU-accepted technique as a confirmation method for dioxin analysis in accordance with EU 589/2014 and subsequent regulations. 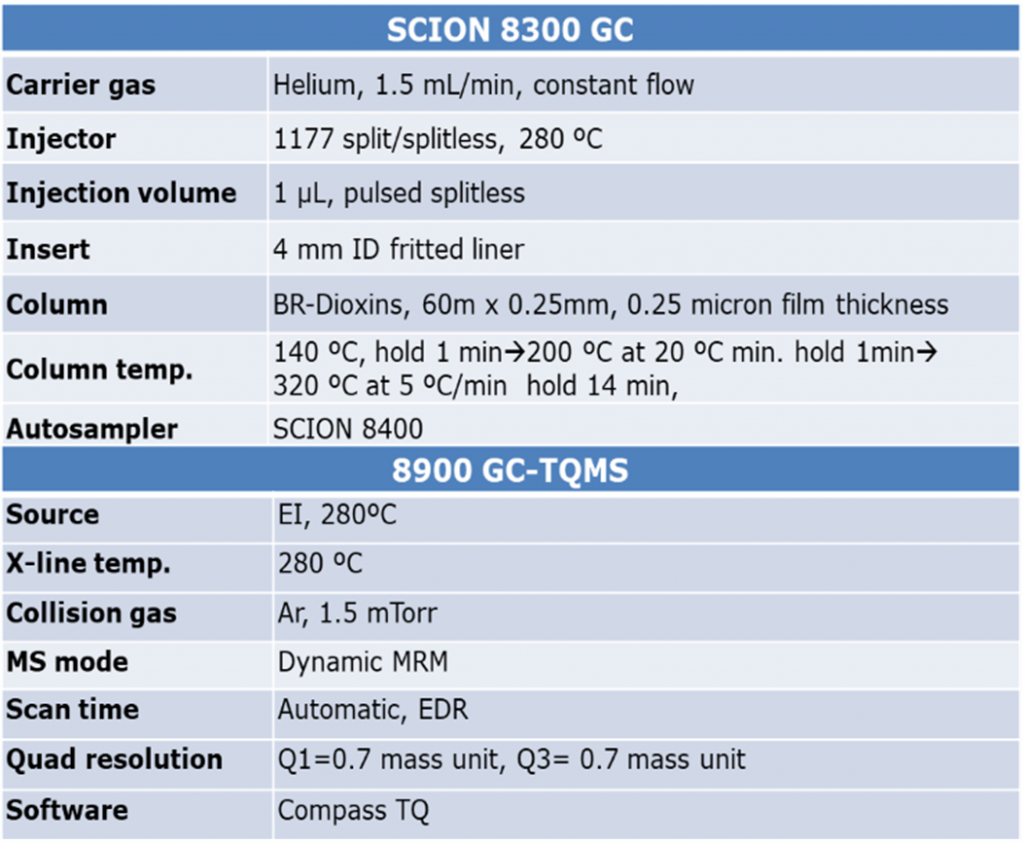 Dioxins are the only group of compounds losing COCl fragment (63 Da). This is a very selective transition producing clean MRM chromatograms with very few interferences.

Two precursor ions are selected for each compound, each with one specific MRM product ion. 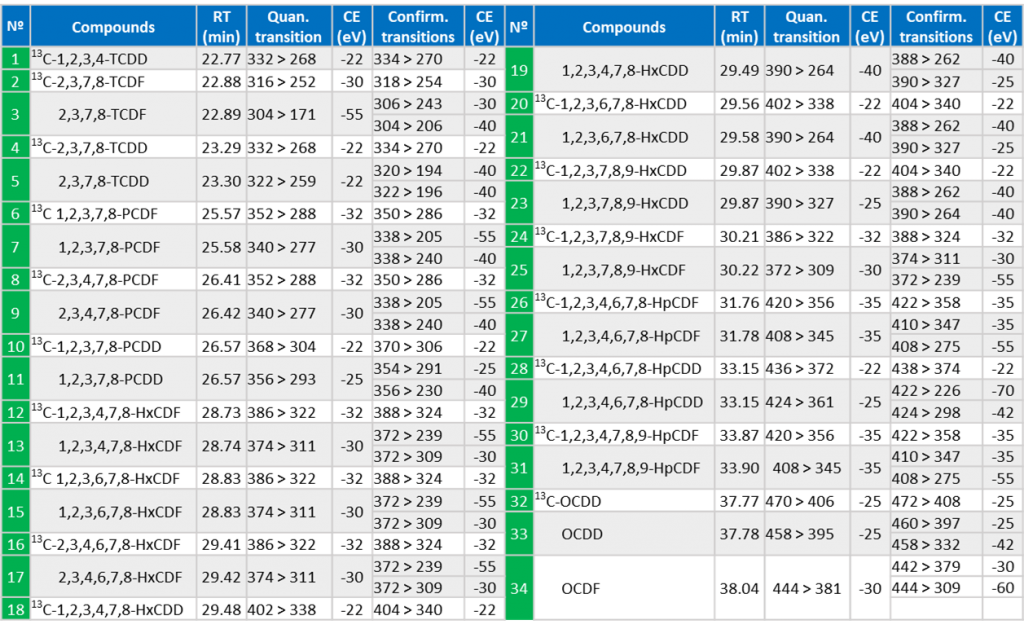 The SCION instruments 8900 TQMS is capable of resolving the different classes of dioxins using the power of MRM (Figure 3). Further, the  power of the  8300 GC Is evidenced by the chromatographic resolution of the HxCDF isomers, well below the 25% peak to peak separation stipulated in the regulations for quantification (Figure 4). 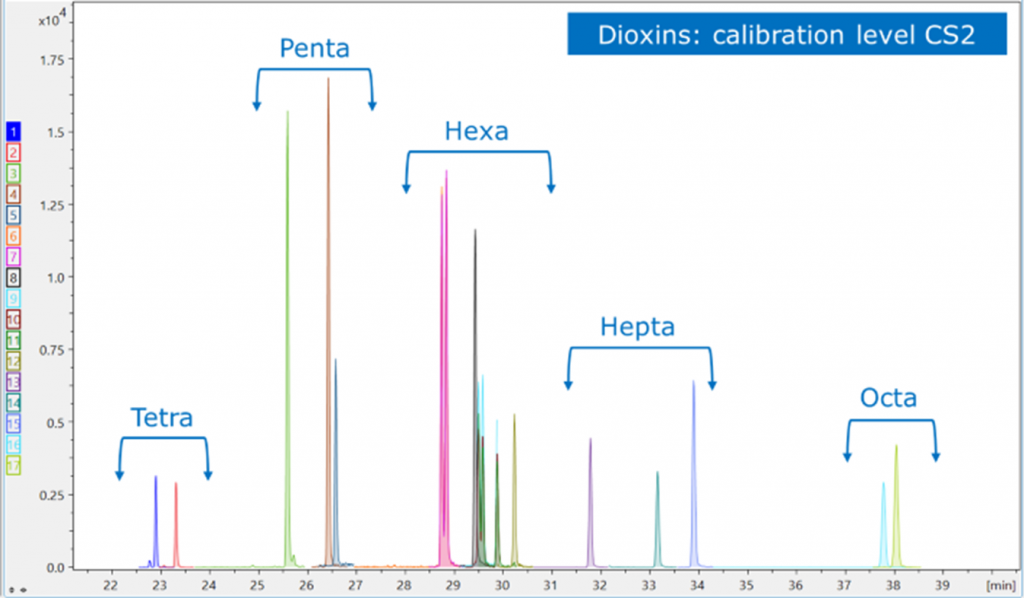 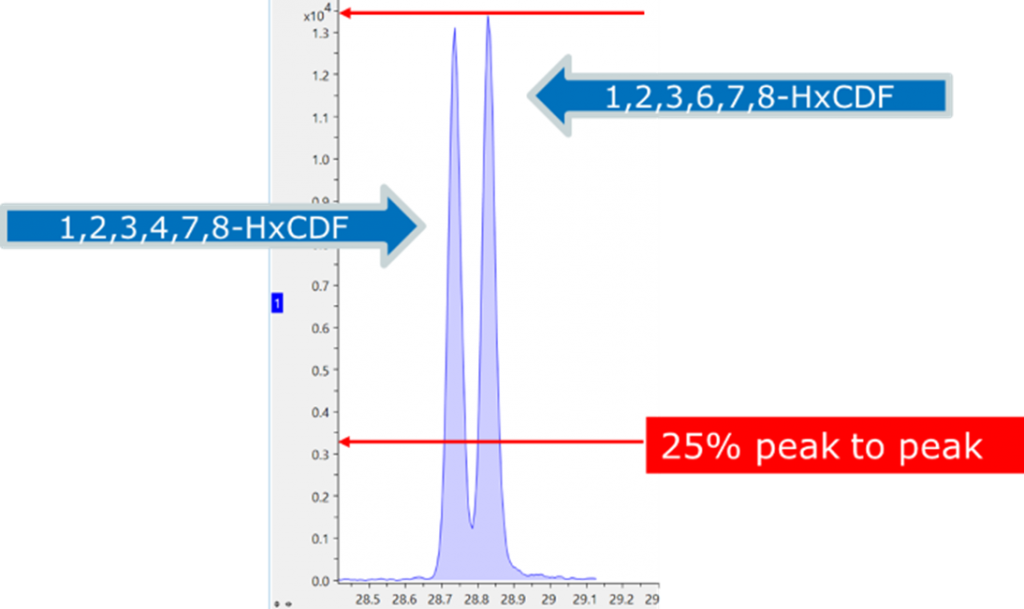 The inclusion of stable isotope labelled internal standards is a key part of the regulatory framework. The Compass TQ software package for automatic quantitation allows a fast and easy overview of the results. Users can set an extensive number of evaluation rules to meet  any stringent analytical regulation. These rules are applicable to any compound in the method and values can be customized by compound.

All analytical performance criteria described in EU 644/2017 have been included  in the method. If the reported values are higher than the setpoint, software will trigger a red flag to warn user that the compound needs to be reviewed (Figure 5). 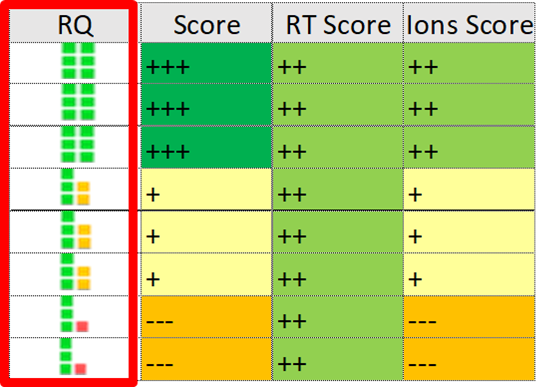 To experimentally determine signal-to-noise ratio (s/n), the lowest calibration level CSL was diluted 10-fold and 20-fold with n-nonane. 1mL of each was injected. Both ions (quan+qual) were detected at LOQ (10fg) and LOD (5fg) levels.

One such comparative analysis was of fly ash (Certified material BCR-615 ) .  The data (Table 3, Figure 7) showed  an accuracy of ± 20% with good corelation between the HRMS and TQMS results. 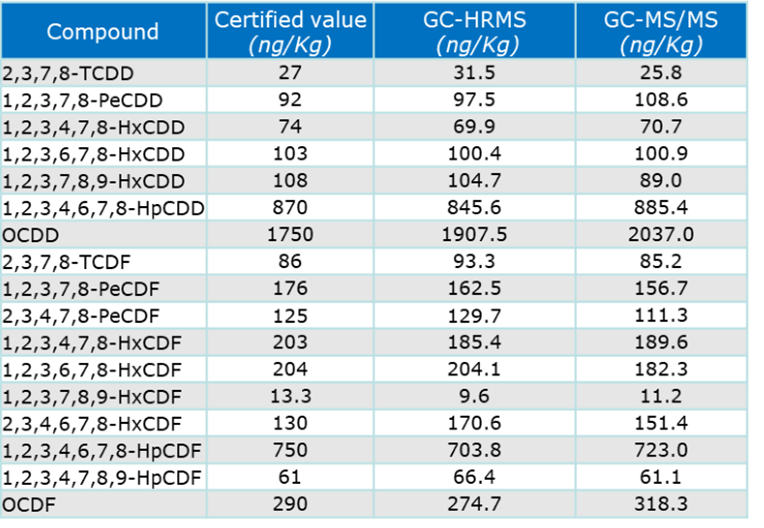 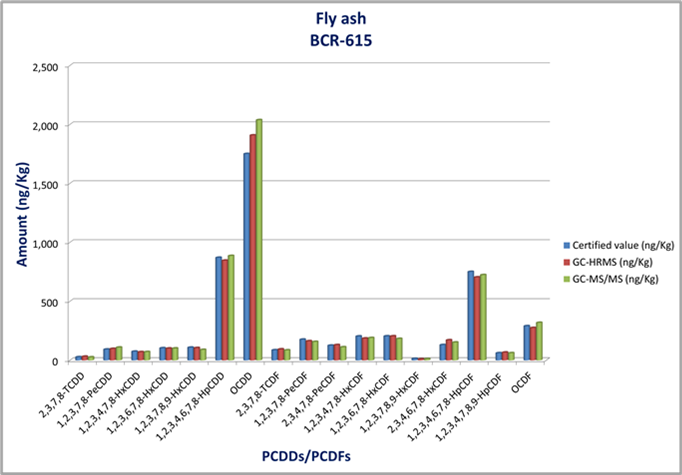 Determination of Dioxins in Animal Feed

To check performance of the method in real samples, an animal feed sample was doped with dioxins at very low levels. Recovery rates of stable isotope labelled internal standards was 60-120%. For every analysis, Compass TQ software checks ion ratios tolerance (RQ score) for each target compound allowing the user to have confidence in compliance with regulatory standards. Ion ratio QC was found to have a tolerance of ± 15%. Figure 8 shows the stability of the ion ratios for 2,3,7,8-TCDD once the complete batch performed for calibration standards and samples is completed. 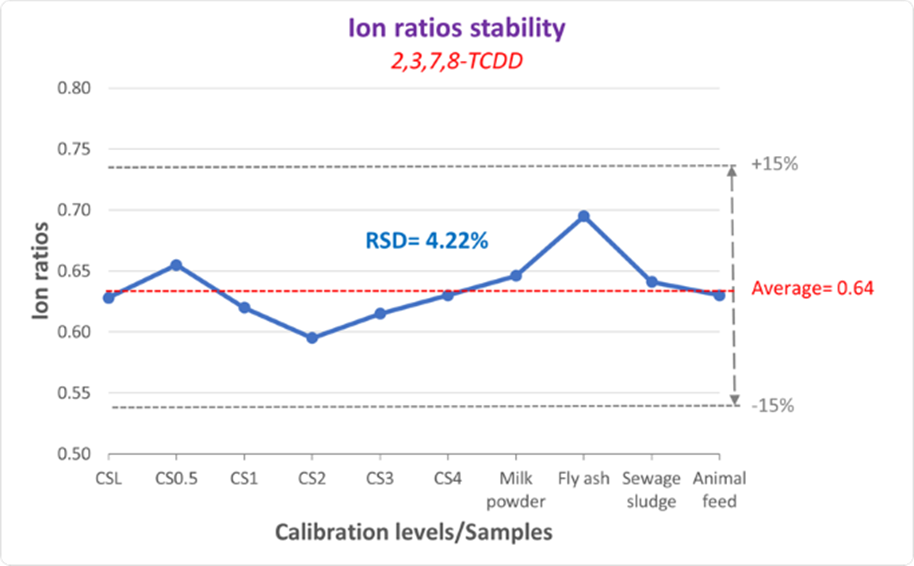