Analysis of DEHP in Drinking Water by HPLC-DAD

DEHP, bis-(2-ethylhexyl)phthalate, is one of the most prominent phthalate contaminants in drinking water. DEHP is also used as a plasticiser during plastic manufacturing. When ingested, it is a cancer-causing hazard and presents a high risk of liver function disorders. For this reason DEHP is a banned substance during food production, under the Restriction of Hazardous Substances (RoHS) Directive by the EU[1], and levels must be monitored. Although a banned substance, commercial sport drink manufactures have been known to substitute palm oil, a common emulsifier, for the more cost effective DEHP.

SCION Instruments developed a method for the identification of DEHP using HPLC and a Diode Array Detector (DAD).

A SCION 6000 HPLC with DAD was used with a C18 reverse phase column for the detection of DEHP in mineral water and sports drink samples. A DEHP analytical standard was prepared at a concentration range of 0.1mg/L to 100mg/L. Standard addition was also performed on two negative water and sports drink samples to demonstrate the capability of the instrument. Samples were spiked with 1ppm and 10ppm of DEHP prior to analysis.

Table 1 details the analytical conditions of the HPLC-DAD system.

The chromatogram of a 10mg/L DEHP standard can be observed in Figure 1 whilst Figure 2 shows the calibration curve of DEHP, over a range of 0.1mg/L to 100mg/L. 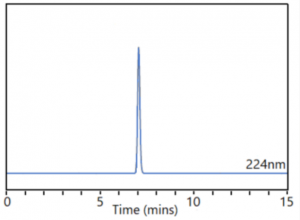 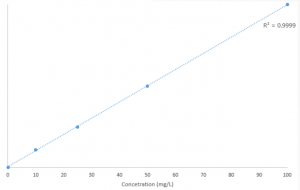 DEHP exhibits excellent linearity over a wide concentration range, as demonstrated in Figure 2. Retention time and peak are repeatability of the system was tested with six consecutive injections of a 10mg/L standard, the values of which can be found in Table 2.

Excellent repeatability of both retention time and peak value was observed, with RSD% values at 0.011 and 0.11, respectively; highlighting the robustness of the SCION HPLC-DAD system.
Mineral water and a sports drink were both analysed for the presence of DEPH. However, both samples were negative. Standard addition was performed on two separate samples of each sample type with an addition of 1ppm and 10ppm DEHP.

Figures 2 and 3 show the overlay chromatograms of both samples, including the initial blank results and both DEPH additions. 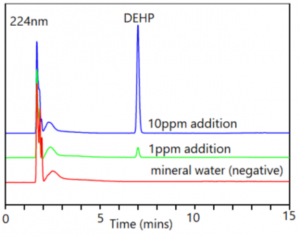 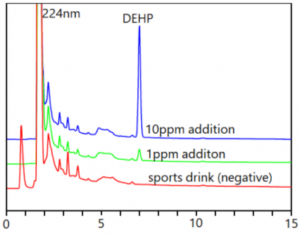 The above figures demonstrate the excellent sensitivity of the HPLC-DAD system even at low concentrations such as 1ppm.

SCION Instruments offers the ideal solution for the identification of DEHP, a restricted contamination compound by HPLC-DAD. Excellent separation, linearity over a wide concentration range and system repeatability was observed for DEHP using a C18 column at 280nm wavelength.