With chemists engineering new “designer drugs” everyday, law enforcement and regulatory bodies need testing to quickly and accurately determine the composition of these compounds. This study will present a static headspace method for rapidly determining drug components for use in forensic applications. A HT3 Headspace Analyzer will be used to examine bath salt samples for the presence of mephedrone (MPD) and methylenedioxypyrovalerone (MPDV or MDPK) by GC/MS.

The illegal drug world has evolved over the last couple of centuries. With the explosion of the drug culture, the U.S. Drug Enforcement Administration (DEA) was formed in 1973 to enforce federal drug laws. Since then, the DEA and legislators has continually been tested by members of society who modify known mind-alternating substances to create new “legal” drugs, typically identified as designer drugs.

The latest designer drug, appearing on the market after the most recent K2 rage, is bath salts. Bath salts are marketed as “not for human consumption.” The label typically states “For bathing use

only. Never for human consumption. Only 30-50 g recommended per bath.” This label, “Not for Human Consumption”, skirts the US federal Analog Act which is part of the Comprehensive Drug Abuse Prevention and Control Act of 1970, which makes it illegal to produce, possess, consume, and sell substances considered analogs of banned drugs.

The cost of some locally obtained bath salts were $20 for 0.5 g. At that price, one bath using these salts would cost $2,000. The labelling gives the seller the apparent legal right to sell the salt, however the bath salts have been found to contain drugs including mephedrone (MPD) and methylenedioxypyrovalerone (MPDV or MDPK). MPD and MDPV are derivatives of methcathinone, which is the oxidation derivative of either ephedrine or pseudoephedrine4. The raw sample may also contain other compounds of interest that can assist in the medical care of an overdosed patient or for prosecution of the manufacturer. Static headspace with the HT3 can accomplish this. The raw powder is added to the headspace vial and heated to equilibrium. The headspace is then sampled by the static option and injected onto the GC/MS to obtain a fingerprint of any compound that might be present in the sample. Static headspace is a common technique in many labs performing this type of drug analysis for blood alcohols. 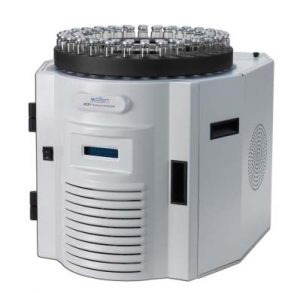 The HT3 headspace instrument was connected to GC Mass Spectrometer for this study. A 5ms SQC column, 15m x 0.25mm x 0.25µm film thickness was used for the characterization of the powders. The instrument parameters are listed in Tables 1 and 2.

For this study, two under-the-counter bath salt samples, Bath Salt 1 and Bath Salt 2, were obtained at a local gas station. Standards of MDPV and MPD were also obtained to determine their headspace GC/MS profile. 50 mg of each bath salt powders were added to separate 22mL headspace vials and sealed. 3,4-Methylenedioxypyrovaleron HCL (MDPV) and mephedrone (MPD) were obtained from Cerrilliant as 1mg/mL solutions as the free base. 5µl was added to a 22mL headspace vial and sealed. Caffeine powder was obtained from Aldrich Chemical Company and a small amount of the dry powder was added to a headspace vial as a reference.

Both bath salt samples showed numerous peaks of interest. The individual bath salts were compared to the three available standards. Figure 2 shows the comparison of the total ion current of the MDPV, caffeine and Bath Salt 1. Bath Salt 1 was found to have MDPV (13.87, 17.12 and 17.46 min RTs), caffeine (14.72 min) and two unidentified compounds (13.68 and 14.89 min RTs). The mass spectra of the 3 peaks observed in the MDPV standard were consistent with the three peaks in the sample, as was the caffeine. Figure 3 and 4 show the spectra of the two unidentified compounds. The MDPV was confirmed to be about 26% of the sample concentration using LC/MS/MS. 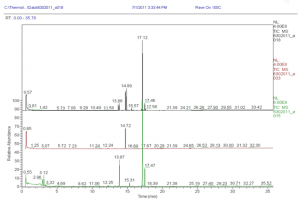 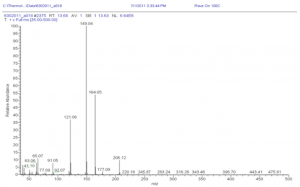 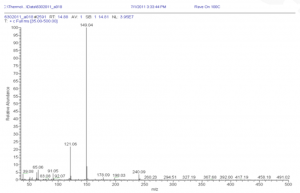 Figure 5 shows the comparison of the total ion current chromatograms of Bath Salt 2, the MDPV, MPD, and caffeine standards. The sample was found to contain MDPV (13.85 and 17.11 min RTs) and caffeine (14.71 min) and confirmed by MS spectra match. The mass spectrum of MDPV in the bath salt can be found in Figure 6. MDPV was confirmed to be approximately 8% of the sample using LC/MS/MS analysis. Numerous other unidentified peaks were also observed in this sample. Their spectra are listed in Figures 7-11. These spectra are presented to demonstrate the HT3’s ability to uncover other synthetic drugs in bath salts that may or may not yet be identified. 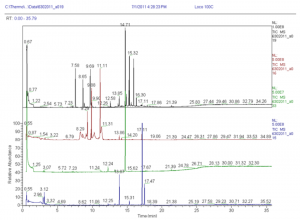 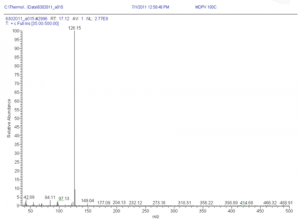 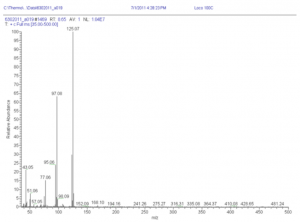 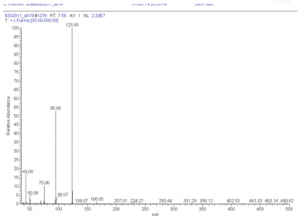 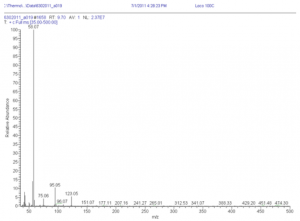 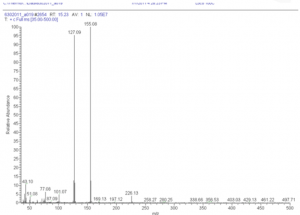 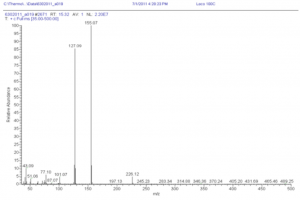 With the drug formulations constantly changing, very little toxicological or pharmacological testing has been done on these designer drugs. Determining the composition of these drugs could be a matter of life and death. The characterization of the components of bath salts can assist in the treatment of overdosed patients and as well as the determination of the manufacturing sites that produce these mixtures. The dry headspace samples allow excellent detection of MDPV, and potentially other designer drug components, in the sample. This technique has implications as a screening procedure for law enforcement and regulatory bodies. Using the HT3 Headspace Sampler, bath salts and other designer drugs can be characterized rapidly and without interferences associated with these potentially difficult matrices.